SFU and the path to a fairtrade campus

Over a 5 year period, SFU has made huge strides to see their fairtrade commitment though.

SFU being a fair trade campus shouldn’t be news to anyone. In addition to meeting the requirement standards as set by the Canadian Fair Trade Network, SFU has pushed the Starbucks franchises on campus to adopt fairtrade practices on campus.

But with any larger initiative comes benefits as well as shortcomings, and SFU’s fair trade ‘utopia’ is no different.

So what is fair trade?

Fairtrade Canada tells us that better working conditions, fair wages, and environmental justice are the major lures. With ideals like these it’s not hard to see why SFU was attracted to the initiative.

SFU has preached fair trade for a few years now, leaning heavily on how it can deepen SFU’s commitment to sustainable living and global equity. There is, however, strong opposition to the movement, with arguments such as poor quality product and internal flaws to the system undermining the initiatives stated benefits.

While the consensus on the project may be left unsettled, as far as SFU is concerned, fair trade is the future.

Since 2012, SFU has been dedicated to implementing fair trade policies at every SFU administered dining service. Fair trade tea, coffee, and chocolate options can be found at almost all major food retailers on campus. Even the SFU bookstore has started stocking the shelves with fair trade chocolate bars.

In a survey last fall, 40% of students said that fair trade at SFU was “Very important,” 44% said it was “Somewhat Important,” and only 16% said “Not Important”.

Over 85% of Starbucks’ coffee is fair trade, and in 2013, the franchises on Burnaby mountain began to offer a fair trade espresso option. This initiative bore fruit to the university in the form of an inaugural award for “Campus of the Year” by Fairtrade Canada in 2014. SFU has been using brands such as Ethical Bean, based in Vancouver, to try and support the local economy as well.

While SFU has been trying to develop a fair trade portfolio, the same can’t be said about every group on campus. Tim Hortons — a franchise that attracts great demand from the student body — has had no obligation to adopt the same fair trade position as the university. The heated conversation with Tim Hortons has been fired up for a couple years now and will surely continue.

How can the student body help SFU’s fair trade vision? In an attempt to implicate the student body, SFU and the Canadian Free Trade Network (CFTN) sponsored students to visit Costa Rica’s mountainous region of Talamanca to acquaint themselves with the origins of fair trade.

The students mentioned that they had gone on the trip feeling skeptical, but returned with a very pleased view on fair trade and its possibilities. Upon return, students Sarah Heim, Prodpran Wangcherdchuwong, and Joana Bettocchi brought with them valuable insight on why making the switch to fair trade is worth the while. The trio spent seven days in Costa Rica learning the history, challenges, and benefits that exist in implementing a fair trade system. “Fair trade isn’t charity,” stressed Wangcherdchuwong.

“The cooperatives we visited in Costa Rica mainly cultivated coffee and cocoa, as well as bananas. A cooperative is essentially an organisation where farmers collaborate to sell their product as a company,” added Heim.

“Operating since the ‘60s, these cooperatives have come a long way. They use their profits altruistically for communal good and a big thing for them is ecological conservation,” explained Wangcherdchuwong. “They don’t use chemicals on their crops, replant trees, and are constantly educating locals to adapt these means of cultivation.”

After understanding the powerful impact cooperatives have on prices and practices, the two students were convinced about the magic that is created in Talamanca. However, in retrospect, the students questioned whether fair trade works in all situations.

Referring to the low requirement standards by the CTFN, Wangcherdchuwong explained that this has enabled every university to get on board with the program. However, there will soon be levels added to the fair trade program such as bronze, silver, and platinum that SFU will aim to climb.

Perhaps such specific certification will answer people who are skeptical about fair trade practices on campus.  “There are certain limitations to fair trade as it works within and against the market,” elaborated Heim. She explained why fair trade cannot accommodate all products in reflection of what she learnt in Costa Rican cooperatives.

When asked about their thoughts on fair trade initiatives at SFU, both Wangcherdchuwong and Heim agreed that SFU’s efforts are genuine. “Students are a huge market for commodities such as coffee and a push from the students on fair trade products could be impactful,” said Heim. 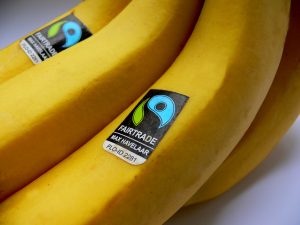 “Students could shift to fair trade coffee, perhaps, as the pricing isn’t drastically different. But, the same can’t be said with other products. In such situations, a larger institutional push is required,” Wangcherdchuwong continued.

Building on that same idea of an institutional change, Heim added that “SFU could potentially have courses around fair trade and could send more students on origin trips, such as the one we went on.”

While these students might have returned home with a strong pledge in their heart, they feel other SFU students might not share their passion. “I felt that students have a fair amount of indifference to this cause. After returning, I have made changes to my consumption habits such as looking at labels to see fair trade percentages,” Heim said.

Working behind the scenes

SFU’s fair trade initiative has grown over the years thanks to student engagement and the administrative team that works under the umbrella of SFU’s sustainability program. Getting Starbucks on board and providing fair trade sugar and chocolate options are milestones that we can be proud of.

Besides having Fair Trade Campus Week once a year and communication through social media, SFU currently lacks a framework for further implementing fair trade products. As a result, the administration is planning to assemble an integrative committee that would include all stakeholders to address fair trade issues soon. Such a committee could slowly solve the challenges that a commitment to fair trade brings with it.

Jana Vodicka, manager of Campus Engagement and Sustainability, explained the crux of the situation. “Working with established brands means that we have to abide by their business model. To get them on board, we have to be strategic about the types of brands we partner with and provide on campus to meet SFU values, while still meeting the purpose of providing the dining services students and staff expect and need.”

Vodicka’s concerns bring us back to Wangcherdchuwong’s assessment — that there are simply too many conflicting interests. However, Vodicka optimistically expressed that the purchasing power at SFU is far too great to not be taken advantage of, and believes that student awareness would only thrust it forward.

Mark McLaughlin, executive director at Ancillary Services, explained how students buying fair trade products, especially coffee across 36 universities at Starbucks, has measurable and positive change for farmers in developing countries. But he agreed that much work still needs to be done.

“As we pushed Starbucks to change its procurement channels, we have been pushing Tim Hortons. We called Tim Hortons management to meetings at SFU and  UBC over the years, and just last October we teamed up with UBC, McGill, Ottawa, and Brock and met their management at their corporate headquarters in Oakville,” explained McLaughlin, only to inform that Tim Hortons still hasn’t turned a new leaf.

When asked about our dear Timmies’ central resistance on the transition, McLaughlin explained that “back in 2013, Tim Hortons told us that their logistics prevent them providing a fair trade option as they only serve one blend.”

However, Tim Hortons has introduced new roasts. “They replaced the [original roast] with dark roast, since then. I believe the true reason Tim Hortons avoids offering fair trade coffee is because it hurts their bottom line — they want to pay the least possible for coffee beans, satisfying their shareholders, but often to the detriment of farmers.”

As often is the case with any profit-seeking business, it is with no doubt that this will be a longer struggle than Starbucks, and one that calls for students’ attention.