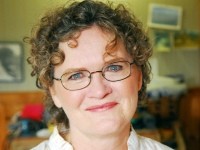 Dr. Russell's Ph.D. thesis was a conversational analysis of the organization of classroom interaction in an endangered language context and its reflective relationship with differing pedagogical foci.

She is currently the Linguistics and First Nations Languages Coordinator in the SFU/Kamloops program and delivers SFU's First Nations Language Proficiency Certificate. She works in partnership with about ten aboriginal communities in BC and the Yukon, often carrying SFU in a backpack to, for example, Haida, Northern Tutchone, Nuxalk, Heiltsukv, Tsilhqot'in, three dialects of Secwepemctsín, two dialects of Halq'emeylem/Halkomelem and St'at'imcets. She co-teaches Secwepemctsin and Heiltsukv with native speakers and has developed elementary school and university language curricular materials in Nuxalk, Heiltsukvla and Secwepemctsin. She also develops mentoring partnerships between aboriginal language learners to work directly with fluent elder/speakers.