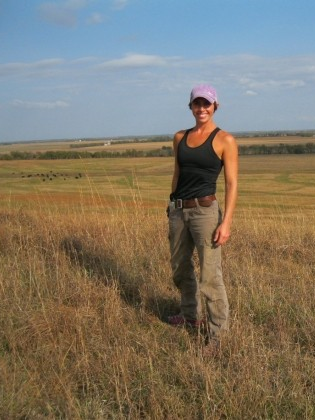 I began working at Erfkroon as an undergraduate at Texas State University in 2012. My involvement as a research assistant developed into a collaboration when I decided to maintain my involvement as a master’s student following completion of my bachelor’s degree. My master’s thesis, “Paleoenvironmental Reconstruction using Geoproxy Evidence at Erfkroon, South Africa,” presents one of the highest-resolution geomorphological studies of the region to-date. Now, as a PhD student under the mentorship of Dr. Francesco Berna, I am developing a research plan to expand on my previous studies. My intentions are to utilize microarchaeological techniques to detect paleoenvironmental and climatic signatures associated with past land surfaces, and to ultimately, develop a spatially and temporally specific model for late Pleistocene (MIS 3-2) paleoenvironment and climate associated with known transitional MSA-LSA, or “early” Later Stone Age, occupations.

My PhD research is affiliated with the Modder River Paleontological and Archaeological Project which is an ongoing investigative study of Stone Age human occupations in the Modder River Valley of South Africa’s central interior. This a collaborative and multi-disciplinary effort led by Dr. Lloyd Rossouw, Director of the National Museum of Bloemfontein’s Florisbad Quaternary Research Department, and Dr. Britt Bousman, Professor in the Department of Anthropology at Texas State University. Though several sites are currently under investigation, my research is focused on the region known as Erfkroon.