Award-winning graphic journalist Joe Sacco was at SFU on November 2, 2016, for an engaging evening in conversation with Chris Brayshaw from Pulp Fiction Books, filmmaker Sobhi Al-Zobaidi, Broken Pencil editor Alison Lang, and Roxanne Panchasi from SFU’s History Department (full video recording below). Sacco is well known for his depictions of historical events in war-torn and conflict-ridden regions, including Palestine, Iraq, and Bosnia and Herzegovina.

He is currently working on a project on the relationship of Indigenous peoples in the Northwest Territories with the resource extraction industry. When asked what made him choose to explore an issue so different than his norm, he explained that a lot of important issues are not covered “because bullets are not flying.”

In between seminars and a number of media interviews, we were able to catch up with Sacco for a few short minutes to ask him about his phenomenal career.

Much of your reporting covers complex and sensitive topics, particularly wars and military conflicts. In light of this, what is your take on “objective” journalism?

I think it’s impossible to be an objective journalist. I guess I don’t really believe in it if there’s really any issue at stake. If there was a car crash, then reporting what one witness saw and what the other witness saw — and you don’t know, you weren’t there — and it’s not sort of an incident that’s going to make a difference in the world somehow…you can be objective in something like that. You just report what one person said, and what another person said.

But once you get to journalism that’s about issues of matter, he-said she-said is just not going to work anymore, and reporting that accurately isn’t going to work anymore. You have to find out what happened. And if you find out what happened, you will tend to sort of say — it’s not if there’s a villain and a victim necessarily all the time — but sometimes one side has more of the truth than the other side. I don’t believe in that kind of journalistic trope that, oh i pissed off both sides I must have done something right, or the truth usually lies right in the middle. So, I guess I don’t believe in [objectivity in journalism].

As a journalist, you open yourself up to a lot of criticism — some more thoughtful than others. How have you navigated that?

I just don’t like it [laughing], turn it off. You know, the first reaction is always sort of defensiveness, and sometimes you should be defensive. Maybe you feel the person completely misconstrued what you were trying to do. Other times you can learn from those things. Every now and then that’s the case. It’s usually with time, and not that you’re really analyzing it, but you know that there’s some truths to that, and it sort of seeps into your head at some point. I mean, criticism isn’t all valueless, that’s for sure.

In your opinion, what makes something “newsworthy?”

Boy. I mean, on a very basic level, will it matter to people’s lives tomorrow? Or are they somehow implicated in something that’s going on? I could give you many different answers. 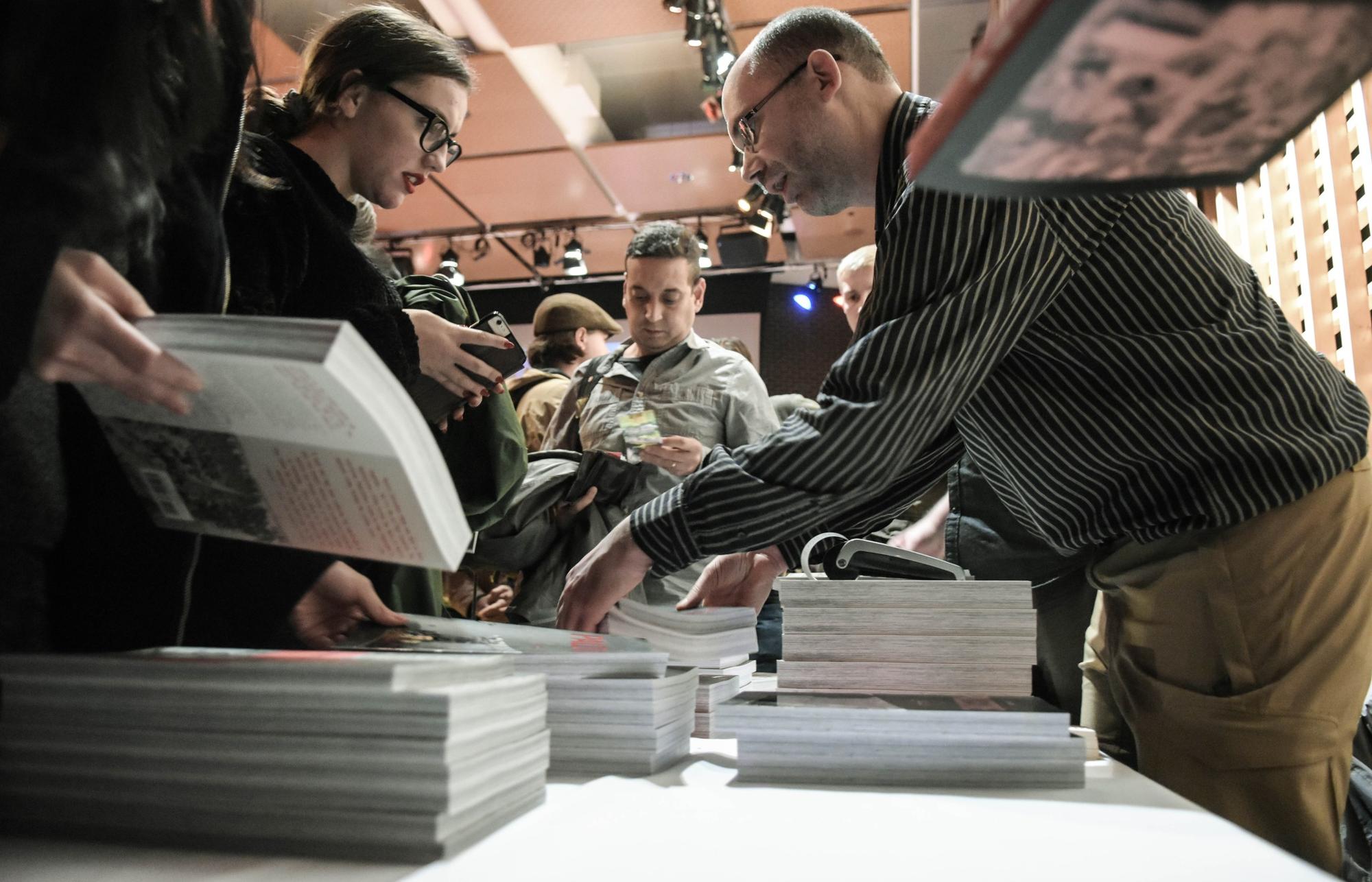 What is your favourite thing you have published, and why?

Bumf — a satirical comic that no one bought that just came out a year or two ago [2014]. It’s very unusual, very different from what I draw. I actually enjoyed drawing, as if I was like a kid drawing. You know, after a while drawing is sort of just part of your day, it’s work, sometimes  you like it, sometimes you don’t. But with Bumf, I just couldn’t wait to get to the drawing table, and I was drawing a lot of obscene things so that was really fun.

When you are travelling, do you work on the road? Do rough sketches? Take photographs? Could you give us some insight as to your process?

I usually take photographs for reference. Sometimes I’ll sketch if it’s not appropriate to take a photograph, or it’s just not wise to take a photograph. But generally it’s photographs. I ask people I’m talking to, “can I take your photograph?” I tend to spend most of my time, rather than sketching, talking to people and interviewing them — as you’re doing now — but with a mind to asking visual questions. If we’re talking about what happened to you three weeks ago, and you said you were driving your car, I might say, well, “what kind of car was it?” You know, that kind of question. Because if I have to draw that, then I need something more than “I was driving in my car,” perhaps.

So I do a lot of interviews, I keep a pretty rigorous journal when I’m travelling and working for all those things that happen in between interviews — because often that’s where the stories take place is on your way to an interview something happens. After my fieldwork is done and I get back, I write a script basically, I guess I call it a script, and then I just start drawing. And the drawing process can go on for years sometimes.

What’s the longest you’ve spent on a single project?

Seven years on Footnotes in Gaza.

That leads into our next question. When depicting a scene, how deep into detail do you go? You said you prompt those specific details, like what car were you driving, but how do you use your judgement to capture the specifics?

That’s a very good question. I don’t really know exactly when I sort of say, okay that’s enough. Generally, the bottom line standard for me is would that person whose story I’m telling recognize that as their story on some level. That’s the absolute basic. But then, anything you could add on top of that is all for the best. It helps them feel like the story is being told more truly — not just the essence of the story, but certain visual aspects of it. So it’s important for me to do a lot of research and I’m pretty vigilant about doing research. You can’t always do as much complete research on everything — you weren’t there — but you can do a lot. Basically, [I go] as far as I can go without just debilitating myself.

Are most of the stories you’re telling about events you were not actually present for?

It’s a mixture. Right now I’m doing a story about Indigenous people in the Northwest Territories actually, and people are talking about life in the bush. I wasn’t there for that, I know nothing about that. I have to rely on photographs, sometimes I’ll contact the person and say, “so when you mentioned this tree you used to cut down for this kind of canoe or boat, what kind of tree was it? Because if I’m going to draw it, that’s something I can find out, and I better find it out. I’m sure in drawing this there are going to be certain details that [they’re going to] say, “uh, that’s not exactly right,” but you know I’m doing the best I can, you know, at least to my satisfaction, which isn’t always to someone else’s satisfaction because they’ll know more.

As a young journalist in the ’80s, you were faced by an industry that made it challenging for you to produce pieces that made a difference in the world. This is arguably still a challenged faced by emerging journalists today, particularly working within the constraints of a 24-hour news cycle. What advice would you offer to someone itching to create honest and critical journalism.

That’s difficult because it’s often hard to make a living and do that. You know, it’s easy for me to say, well just get out there and do this and that, but the truth is you kind of have to, and everything is a roll of the dice. It doesn’t mean that it’s going to work. But I think you have to take yourself — I’m not saying the mainstream…can’t fashion you as a good journalist, because I’ve met a lot of good mainstream journalists, and often they have the resources — though less and less so now — but often they have had the resources to do stories and to go places, to hire translators and all that sort of stuff. But, I guess if it’s an individual I would say put yourself in a situation, go somewhere with a camera, go somewhere with your notepad, and just see how that feels and give yourself a chance. And you know you could probably in these days of social media and all that you could probably get it out there, but that doesn’t necessarily pay your bills. And that’s something that has to be learned little by little along the way. There’s no great advice for that.