Matt Hern launches “What a City Is For”

Community organizer and urban studies lecturer Matt Hern launched his new book, What a City Is For: Remaking the Politics of Displacement (MIT Press, 2016) on October 21.

Hern gave short talk on private ownership, land as capital, and the particular case of racialized displacement in Portland’s Albina neighbourhood — all themes he explores in What a City Is For.

The book presents the paradoxical case of Portland, Oregon — often hailed as the most progressive city in the US for being bike-friendly and walkable, with an impressive transit system. Hern argues that the state of Oregon has a history of racist policies that have been carried through to present-day.

“The city of Portland in particular, has a really remarkably racist history. ”

Hern discusses the displacement and dispossession of folks who were segregated and pushed into, and then driven out of Albina, Portland’s one major Black neighbourhood. “It’s really interesting to me that it happened in such a liberal milieu, because, in urbanist circles, people always talk about Portland as one of the most admirable cities in North America,” said Hern.

Hern has been travelling to Portland frequently over the last decade, often with graduate students in SFU’s urban studies program. “One of the things I noticed right away was that it deserves its reputation as the whitest large city in North America.

“I became curious about it and followed the story and found that the state of Oregon, and the city of Portland in particular, has a really remarkably racist history.”

While his research began with Portland, Hern takes the opportunity to interrogate the status of land locally and globally and to investigate potential solutions by looking critically at the sovereignty of land. 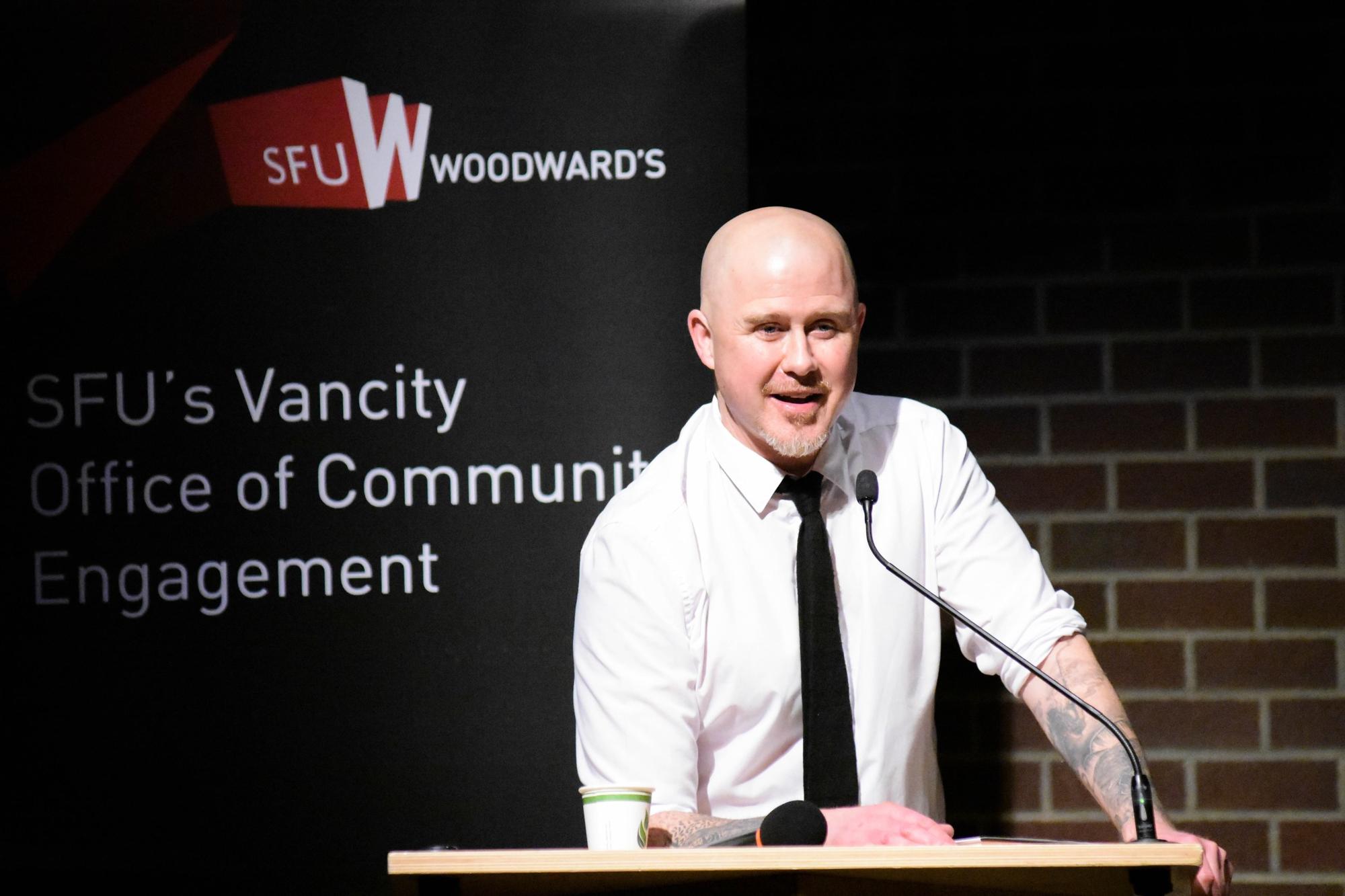 Over the course of the evening, a series of panelists — comprised of individuals Hern collaborated with over the course of writing What a City Is For — shared their own experiences and thoughts regarding displacement, as well as their reactions to the book. Each of the panelists influenced Hern’s writing in one way or another, and many show up throughout the book.

Glen Coulthard, a member of the Yellowknives Dene First Nation and is an associate professor in the First Nations and Indigenous Studies Program and the Department of Political Science, discussed how What a City is For engages with the politics of decolonization, dispossession of Indigenous peoples, and gentrification of unceded land.

Also sitting on the panel was Josiane Anthony, who is currently studying sociology with an interest in refugee and immigration issues. Anthony shared her experiences of growing up in a refugee camp in and discussed the impact of displacement on identity.

Sobhi Al-Zobaidi is a restauranteur, novelist, poet, and independent filmmaker currently working on his doctorate at SFU. As a part of the panel, he discussed Palestine and its people’s unique relationship to space having been displaced and dispossessed.

“It’s distorting to cast people who are being displaced, or dispossessed, or subject to gentrification as victims.”

The final panelist of the night was Lisa Bates, an associate professor at the Toulan School of Urban Studies & Planning of Portland State University. Her work in Portland relates to housing policy and planning, with a focus on social justice. She shared her research on how people of colour and low-income households in Portland make housing decisions, explaining how the city and its different neighbourhoods are perceived.

Hern said of his invited panelists, “I really hope that all these folks hear their voices in the book.”

Hern encouraged the audience to consider the ways in which we can act in the face of displacement: “That’s not our fate and we can think through and past the anxious and grasping proto-certainties of ownership and property. If we start to think about rematriations, if we think about decolonization, if we think about reparations, that is the right starting point. Thinking through that offers some kind of opportunity to get out of the tired narratives of gentrification which seem so certain.”

What a City is For: Remaking the Politics of Displacement is available through Pulpfiction Books.

See below for a full video recording of the book launch.