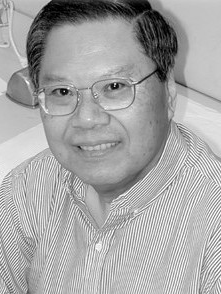 Cyril Thong first came to Canada in 1969 to start his MSc with John Webster, transferring into the doctoral program in his second year. Fortunately for Canada and for SFU, Cyril took a teaching position in Biological Sciences after completing his PhD in 1973, following a brief return to Singapore.

True to his Singaporean roots, Cyril loved to play cricket at the Brockton Oval playing fields in Stanley Park. When he played intramural softball with his Biology colleagues, he refused to use a mitt, making unprotected two-handed catches like a true cricketeer.

Cyril was a devoted husband, father, and grandfather. Cyril and his beloved wife Christina took great pride in their children, Jennifer and Leonard. They were very involved with their grandchildren, Alex, Kaiya, and Kaylee, taking care of them when their parents returned to work and offering before and after school care when the children went to the elementary school conveniently located across the street from Cyril and Christina’s home.

Cyril was a wonderful teacher who had a major impact on the many thousands of students and hundreds of TAs who took or taught General Biology BISC 101. He was superbly well-organized, an important strength for running a teaching lab for hundreds of students. Cyril managed to learn the names of many of his students, even in classes of 400 or more. He had an excellent sense of humor, often laughing with the students in his lab. His door was always open to those who needed help with a course, advice about academic choices, or a letter of reference for graduate or medical school. Well into his 35+ years as an instructor at SFU, every single student for whom he wrote a reference letter was accepted into medical school. Cyril was selective as a referee and each reference letter reflected a deep understanding of the applicant’s strengths and weaknesses.

Many of his students and TAs wrote letters in support of the SFU Excellence in Teaching award that Cyril won in 2004. When SFU’s student newspaper The Peak wrote an article listing the best and worst instructors, based on those who were evaluated on the Rate My Professor website by at least 50 Simon Fraser students, Cyril ranked among the top 5 teachers at SFU. BISC 101 is a tough and demanding course, but Cyril was always available to help students to master difficult material, often taking a different approach to help each student.

Cyril’s contributions reached beyond SFU. Many of his TAs were international students, who benefited from his mentorship and tutelage. For 10 years, Cyril served as Biology coordinator for the Eastern Indonesia Universities Development Project, a highly successful CIDA-funded project that helped to develop a Faculty of Science at each of five Eastern Indonesia universities. During his tenure at EIUDP, Cyril organized participation in this project by Canadian and Indonesian biologists and taught courses for Indonesian university instructors in both countries.

Cyril was a generous colleague. He was universally liked and admired by all members of the Department of Biological Sciences: students, faculty, and office, technical, and support staff. Cyril modeled collegial behavior, both earning and giving respect to all those he worked with. In recognition of his contributions, Cyril is the first – and so far, the only – teaching faculty member in Biological Sciences to be given emeritus status upon retirement.