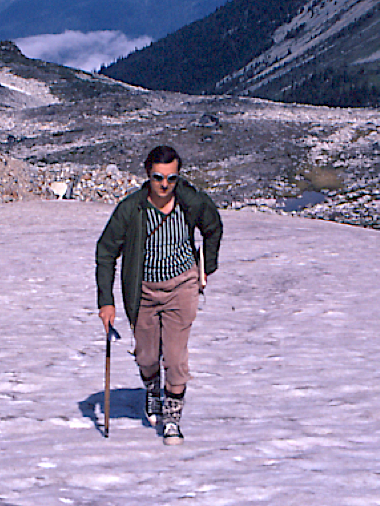 In his online obituary, some basic details of Dr. Brooke’s life are well elaborated – details I was totally unaware of when I entered SFU as a charter student in September 1965, intent on following a personal interest in biology in general, and zoology and wildlife biology in particular. I did not meet Dr. Brooke (Bob after many years), until I took his BISC 204, Introduction to Ecology. Bob had noticed me since I did very well, and offered me a summer job in his laboratory, conducting plant physiology measurements in the field at Diamondhead in Garibaldi Park. Here I learned of Bob’s love of subalpine and alpine environments, where he hiked, identified plants of all kinds as he went, and interpreted the lovely landscapes of high mountains. The photo I took and show at the end is Bob in his mountain gear, trudging up a snowbank with red snow algae on Wedge Mountain, wearing snow goggles, hiking knickers, and socks, and steadied by his trusty ice axe.

A life-changing event (for me) happened when I took BISC 404 (Plant Ecology) in 1968, always Bob’s signature course that included a 5-day-long road trip around the southern part of BC, investigating the ecological zonation of the province according to the biogeoclimatic zonation system he had helped build during his PhD days at UBC, working with Vladimir Krajina. His thesis was published as a detailed monograph, focused of course on the subalpine Mountain Hemlock zone. It was no surprise to see Bob at his animated best in the high elevations of Jasper National Park or Mount Revelstoke, where he named every plant pointed out to him by students, and outhiked most of us, even while enjoying his one vice that I know of – a cigarette or two (or more). I know that I was not the only student permanently influenced by this trip – several others have commented to me that they cannot walk in nature today without remembering Bob and trying to recall the Latin names of the trees, shrubs, and other plants around them, just like we did in the field in preparation for the lab exam.

Biology 404 changed my focus from zoology to plant biology, and later to my main academic focus, paleobotany and paleoecology. This final transformation was also influenced by Bob, who supervised my research project on plant fossils from Eocene rocks of southern BC. I became fascinated by beautiful fossils on the Quilchena Ranch during an SFU Outdoor Club weekend. I collected and then tried unsuccessfully to identify the ancient plants for my project. To help me, Bob introduced me to Dr. Glen Rouse at UBC, who generously lent me books on paleobotany, and later invited me to do my PhD with him. I discovered a new species of fossil flower during my study, which I published in a short paper with Bob as co-author.

In 1975, I joined SFU as an assistant professor in Biological Sciences, became a faculty colleague rather than student, and got to know him more personally. He was a unique individual, somewhat reserved and a perfectionist at heart, with a dry sense of humour that occasionally burst forth unexpectedly and heartily. He liked gardening (of course) and maintaining his cedar-clad house near Deer Lake. I learned about his interest in ancestry and his delight in learning more about his family history.

I currently occupy his old office in the Shrum Science Center, and still keep a few small paper notes on my corkboard that he wrote in his unique fine script. We always remained friends, and I remember him often and fondly for his generosity and helpful nature. He is still missed.