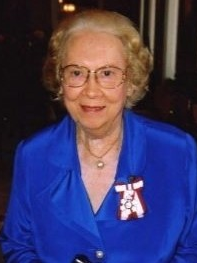 Professor Thelma Finlayson passed away peacefully in her sleep on 15 September 2016 at the age of 102. Thelma had an amazing, fascinating and influential life. She was a pioneering scientist and a giant in the pest management world. She, together with Dr Bryan Beirne, had a vision of controlling pests in an integrated manner, with as little chemical pesticide use as possible, long before such ideas were fashionable or accepted. Together they founded the Masters of Pest Management Program (MPM) in 1973 at Simon Fraser University (SFU). This program is still going strong today, having graduated hundreds of students from around the world.

I first met Thelma in 1983 when I arrived at SFU to register in the MPM program. For me it was a new program, a new university and a new country. To say I was overwhelmed is an understatement. Everything felt strange and foreign. I had not been on the SFU campus for more than an hour when Thelma bounced up and welcomed me to the program, the university and the country. She told me her door was always open and to pop in and see her any time. Suddenly things didn’t seem quite so strange and foreign anymore. I remember that day as clearly as if it was yesterday. I was 21 and Thelma was 69 and had officially been ‘retired’ for 4 years. Thelma became my mentor and role model, and also one of my closest friends. She has been and continues to be one of the greatest influences in my life and in the lives of so many others.

Thelma was born on 29 June 1914 and did not meet her father until he came home from the First World War when she was 4 years old. She grew up in a rural area and it was a big adventure to move 120 miles to the city of Toronto to attend the University of Toronto in 1932. It was her first trip away from home. Thelma took an Honours Science degree and did not take an entomology class until she was in her fourth year. The eminent entomologist who was the professor for the course walked in to class on the first day carrying hundreds of vials of preserved insects, wrote the names of ten texts on the board, then told Thelma, and the one other student in the class, to dissect and draw all the specimens. Then he left and they never saw him again, although he had supplied an exam for them to write at the end of the academic year. Although Thelma said it helped her become self-reliant and to work independently, it was extremely traumatic and she vowed that she would teach her own entomology courses very differently!

Thelma graduated in 1936, the height of the Great Depression, and was determined to get a job at the Dominion Parasite Laboratory in Belleville, Ontario, which later became part of Agriculture Canada and prelude to Agriculture and Agri-Food Canada. She arrived and presented her newly minted qualifications but was immediately turned away as they were not about to hire a female! She refused to leave, sitting on their doorstep, reading entomological texts in their library, chatting to other scientists and generally refusing to just “go away quietly”. Eventually someone needed an extra pair of hands and so she was asked to help. After a period of volunteering, eventually someone felt guilty enough to actually offer to pay her for the work she was doing and she was offered a job for the princely sum of $50 a month, as long as she worked holidays and weekends as well! Thelma was the first female scientist to be hired. Sometime later she married another entomologist there, Roy Finlayson. Thelma was then fired because, in 1940, married women were not allowed to work in the civil service. Then war struck again, and, in 1942, Thelma, and many other women scientists were hired to replace the men who had gone to fight. But after the war, they said, congratulations, we’ve won the war, you’re fired! Thelma fought all the way up to the Assistant Deputy Minister, and won – winning an extremely important human rights battle for women in Canada.

Thelma’s first project at Belleville was in the classic biological control of the European spruce sawfly that decimated the forests of New Brunswick and Quebec in the 1930s and 1940s. This involved rearing millions of wild caught sawfly cocoons from Europe and Japan to identify and propagate possible parasites for release. She then spent several years collecting and dissecting hundreds of thousands of grasshoppers to harvest their immature parasites. She also worked with a parasite of sawflies to determine the best diet and temperature ranges needed to achieve the highest levels of fertility and fecundity. One of her greatest specialties was taxonomy of final instar larvae of beneficial parasites used to control agricultural and forest insect pests. The Laboratory was widely regarded as one of the most prestigious biological control centres in the world.

Thelma had an active and rewarding career with the government as an entomologist, published many papers and monographs, did a tremendous amount of foundational work in biological control and had two insects named after her, an oakworm moth, Anisota finlaysoni, and a wasp, Mesopolobus finlaysoni. When many people are beginning to think of retirement, Thelma moved across the country to the fledgling Simon Fraser University to begin a new career as a professor. It was not just very brave to start an entirely different career, but brave for other reasons too as she did not have a PhD because she had been too poor to continue at university. Over her career with the government, she published many monographs each of which could have been PhDs in their own right, but she did not have the actual degree. Despite this, she decided to embark on a career as a professor and came to SFU in 1967 where she helped Bryan Beirne establish the Masters of Pest Management program, the program that brought me to SFU, and Canada. Thelma was the first woman to be hired as a professor in Biological Sciences and rose to full professor in a short time. She was also the first Professor Emerita. So many firsts!

The MPM program is, rightfully, world famous, attracting students from all over the globe. Many overseas graduates have gone back to their own country afterwards to become leaders in their forestry or agriculture departments, and those in Canada are employed in all sectors of pest management, helping to ensure that Canada’s agricultural produce is the finest in the world. As a biological control specialist, Thelma understood the importance of biological control in pest management so she endowed a Chair in Biological Control in 2008, currently held by Dr Jenny Cory. She has also established many awards and graduate scholarships for students in the Pest Management Program.

Before she retired, Thelma recognized that many students were in academic distress and she was particularly gifted in advising and helping them overcome their academic challenges. She was one of the first people associated with academic advising when it was first established at the university. She volunteered her time advising students for almost 40 years before it became too much for her to physically walk to the centre from the parking lot. At 95 she was probably the oldest academic advisor ever. Innumerable students have benefitted from her sage advice and calm non-judgmental tones. Most have progressed into respected careers whereas, without Thelma, only despair and failure might have been the endpoint. After meeting with Thelma, students would be inspired and encouraged to find their way. Some years ago, I became the Undergraduate Director in Criminology and whenever I had a question that stumped me, I knew I could always ask Thelma as she knew the answers to all student related issues despite being in her 90s. I used to tell any of my Crim students who needed to go to advising to go and see Thelma, rather than whoever they were supposed to go to in Arts as I knew Thelma would look after them kindly. Two years ago, SFU, rebuilt the academic advice centre and renamed it the Thelma Finlayson Student Engagement Centre in her honour. At its opening she gave a speech for 5 minutes, with no notes! At her 100th birthday, she gave a 20 minute speech, again, with no notes.

Thelma won many awards. She was awarded an honorary doctorate from SFU in 1996, the Order of Canada in 2005, the YWCA Women of Distinction award in 2007, and SFU’s Chancellor’s Distinguished Service Award in 2010, to name just a few. She was made an Honorary Member and Fellow of the Entomological Society of Canada and Honorary Life Member of the Entomological Society of British Columbia and received the C.D. Nelson Memorial Prize for outstanding service to the University. She published her most recent paper at the age of 99!

Thelma led by example thousands of women scientists and showed time and time again that women can be great scientists and compassionate leaders. She influenced so many generations of young women as well as young men, and her legacy will live on forever in those people and their students, and in their students. She made a difference in so many peoples’ lives by example and by advice. She changed the world for women scientists and we are forever grateful to her for her strength and leadership. To see a conversation with Thelma go to: https://stream.mcintyre.ca/sfuopen/title/20403

We will never forget her.

(Some parts based on “An Entomological Memoir” by Thelma Finlayson, 1984)