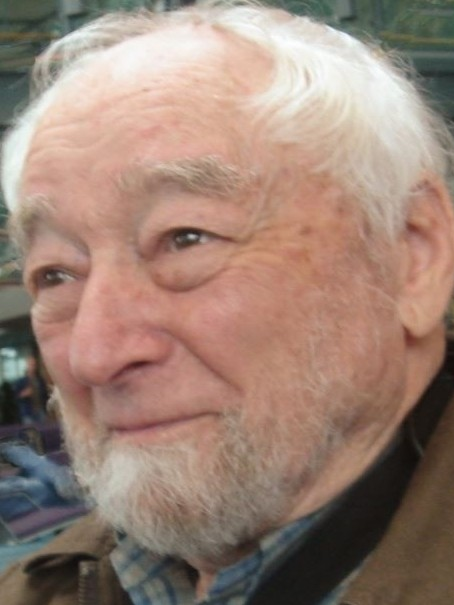 Our colleague and dear friend Bill Vidaver died August 31, 2017 while on a family excursion to Salt Spring Island. He was 96.

Bill was a charter faculty member of SFU, coming in 1965 with a PhD from Stanford University (1964) working with Lawrence R. Blinks at the Hopkins Marine Station, and postdoctoral work with C. Stacy French at the Carnegie Institution of Washington at Stanford. His love of marine biology and interest in marine algae developed further during these years.

Bill’s research was influenced by his machinist expertise and Blinks’ preference for investigating physiological processes in intact organisms. During his graduate studies, in order to study the effects of high hydrostatic pressure on photosynthesis, he designed and manufactured pressure cuvettes with windows for the passage of light that could withstand a thousand or more atmospheres of internal pressure. Within this chamber, an O2 electrode detected the O2 evolved by a leaf or algal blade. Action spectra for O2 production were measured in response to pulses of monochromatic light. He discovered that pressure had different effects on the two photochemical processes of photosynthesis and this helped to distinguish how each contributed jointly to the complex process of O2 production.

Later, at SFU, Bill developed an instrument called a fluorometer that included a small probe that is sensitive to the rapid changes in fluorescent light emitted by chlorophyll-a in response to a pulse of light. This provided another window into photosynthetic processes in the leaf. The fluorometer is now widely used in the field or the teaching laboratory, as well as for sophisticated measurements in the research laboratory. For example, it can be used to monitor defects in photosynthetic activity due to such factors as frost, water stress, heat, disease, nutrient deficiency, or pollution. This and a later version of the fluorometer that is capable of collecting the fluorescence emitted in all directions from conifer needles, were patented in 1978 and 1991.

When Bill arrived at SFU in the fall of 1965, he worked with Don Nelson and colleagues to recruit faculty and establish a curriculum for the new Department of Biological Sciences. Always interested in politics, he became Faculty Association President in 1966. In October 1967, the entire FA Executive resigned in protest because SFU President Patrick McTaggart-Cowan refused to share decision-making with the Faculty Association. Regardless, Bill thought McTaggart-Cowan was a good president and was disappointed that McTaggart-Cowan was later forced to step down. Those were the tumultuous late 60s, when university politics was a major distraction from teaching and research.

Most of Bill’s more than 80 publications were coauthored by graduate students, postdocs, visiting professors or SFU colleagues. The latter included Henry Speer, Geoff Lister, Bob Brooke, John Webster (Biology), and 16 publications with Konrad Colbow (Physics). Tools such as high hydrostatic pressure, the O2 electrode and his fluorometer answered questions about photosynthesis in a variety of plants and marine algae. Other areas investigated included light regulation of seed germination and bioluminescence. In the 80s, with a succession of graduate students and support from the BC Ministry of Forests, the focus turned to measuring the vigor, survival and development of forest and crop plants undergoing in vitro clonal micropropagation. In 1988 Danielle Donnelly and Bill published a widely used manual: Glossary of Plant Tissue Culture. Many of his graduate students are now retired or retiring from professorships in Canadian and German universities or are active in government positions (e.g. Agriculture Canada, Ontario Forest Research Institute).

Bill was also a teacher/researcher in the summer program at Friday Harbor Laboratories. He went on one sabbatical divided between Freiburg, Germany and Bodega Bay, CA, and another at the Scripps Institution of Oceanography. In 1989, he taught at Pattimura University, Ambon, Indonesia as part of the Canadian International Development Agency programme.

He was a founding member of a Photobiology Group at SFU that brought together faculty and graduate students from Biology, Physics and Chemistry. Everyone who worked with Bill was grateful for his wisdom, wit and support. Many also enjoyed playing a good game of squash with him. Bill was the first faculty member to retire from SFU, in 1992, having managed to secure two three-year post-retirement contracts beyond the (then) 65-year required retirement age in BC Universities.

Bill lived in West Vancouver throughout his 52 years in Canada. He was married to Josephine (Brown) when he came in 1965. Many remember their delightful annual Christmas parties that brought diverse colleagues and friends together. Sadly, Bill lost Jo to cancer in 2006. They were married 55 years.

Bill spent his last 10 years with Dr. Gabrielle Weiss, whom he married in 2007. Having ourselves recently moved to West Vancouver, Carolyn and I became close to Bill and Gaby, enjoying various activities with them including meeting every week for bridge, drinks, dinner and talk. We also got to know Bill’s daughter Judi, his son Aaron, and Gaby and Bill’s long-time care givers Emma and Ruth. During these joyful last years, although Bill had a major mobility problem, his mind remained keen as ever. What wonderful discussions we had! And Bill played a good hand of bridge right up to the day before he died!

Prepared for the SFU Retirees Association by colleague A H Jay Burr and son Aaron Vidaver.

Photo:
Bill and experimental apparatus during grad studies at Stanford