REVIEW: Curtis Grahauer on Ricardo Basbaum: The Production of the Artist as a Collective Conversation

SCA MFA candidate Curtis Grahauer offers a kind of 'participant observation' based introduction to Ricardo Basbaum: The Production of the Artist as a Collective Conversation. As he explains in his text, Grahauer is "currently enrolled in the course Basbaum is teaching alongside SFU faculty member Sabine Bitter as part of his residency." His anecdote about taking Basubaum's somewhat mysterious/anonymous object, the New Bases of Personality (or NBP), which instigates/facilitates Basbaum's long-running Would you like to participate in an artistic experience? project, out for a night of dancing is both funny and useful: it offers unusual insight into Bausbaum's generous form of collective yet particularized inspiration. 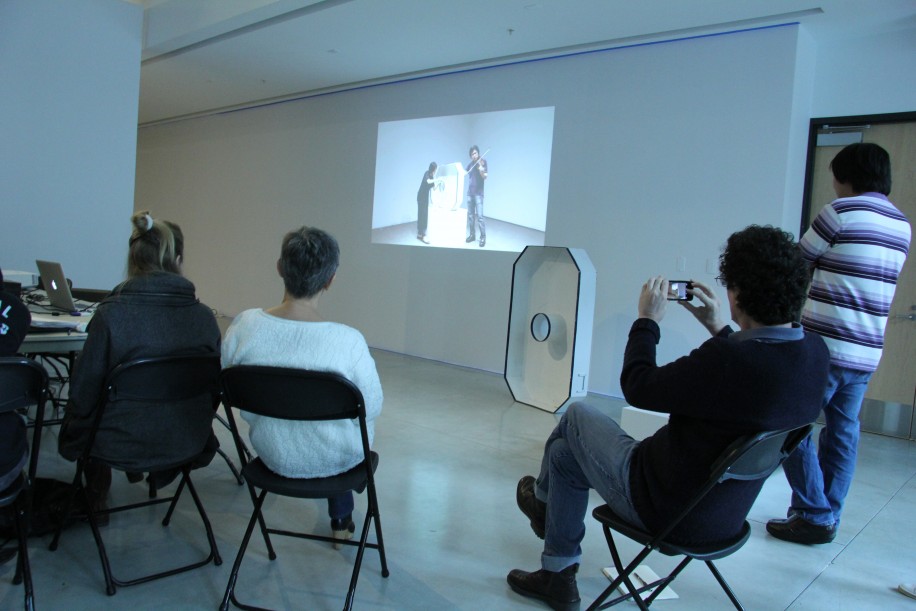 The Production of the Artist as a Collective Conversation, an exhibition by Rio de Janeiro-based artist Ricardo Basbaum - the current Audain Visual Artist in Residence - opened at the Audain Gallery at SFU Woodward's on October 16. The show will transform over the course of its eight-week installation as audience contributions are added.

Basbaum's conceptual and participatory art practice asks the audience to consider the nature of what constitutes an artistic experience through his ongoing project (since 1994) titled, Would you like to participate in an artistic experience? As part of this ongoing project, for the duration of this show, and for up to a week at a time, members of the public can sign out a large steel object called NBP (New Bases of Personality). This object resembles an eye, but also calls to mind a large cake pan, or some kind of communal urinal. Basbaum tells audiences, "You can do whatever you want with it. Use it as you like, the way you think is best."

As members of the public interact with the object over the course of the exhibition, they are invited to upload digital documentation to Basbaum's website (www.nbp.pro.br). These images will be added to one of the two projection loops in the gallery - one video, the other still images - which are currently displaying documentation of a variety NBP experiences over the object's 20-year lifespan.

I am currently enrolled in the course Basbaum is teaching alongside SFU faculty member Sabine Bitter as part of his residency. After seeing what seemed like several dozen images of people sticking their heads, arms, and legs through the NBP, or various participants laying down in it like a human yin yang, I was skeptical of how taking selfies with this cumbersome metal object would be the fulcrum of an 'artistic experience.'

Along with four other students in the class, I took the object, strapped to a handcart, to a Do the Hustle night at the Astoria for dance lessons - our attempt to slightly subvert nature by inviting the object to take part in an artistic experience. Some of my skepticism dissipated as people, with no prior knowledge of the NBP and its history, wanted to dance with it and get their picture taken with it.

Without having seen any of the documentation of the previous participants, people were sticking their appendages through the hole of the object, and one couple insisted on getting their picture taken in the 'classic' human yin yang. One could make the argument that, in the age of social media narcissism, the desire to get your picture taken at an event while doing funny things is the norm, but the people who were interacting with the object were also curious about it. They all seemed genuinely excited when we told them that it was part of an art project.

Another participatory element of the exhibition will be a live event which will take place at the end of this month. Collective Conversation will function as a workshop to create a cooperatively written script, which will result in a live reading and a sound document. The recording of this performance will be added to the exhibition, alongside the previously recorded sound pieces and the corresponding scripts that are already available to check out at the gallery.

This article was originally published for SFU's The Peak Newspaper click here.