Rome after Rome: The Byzantine Middle Ages from the end of Antiquity to the Crusades (4)

The history of the Medieval Romans and their polity surveys the “other” Middle Ages. The course familiarizes students with the social, political, economic, and cultural history of Byzantium from the rise of the Caliphate in the seventh century to the Carolingians, the Crusades, the emergence of the Italian maritime republics and the ascent of the Seljuk Turks. Students with credit for HIST 308, HS 308, HIST 317, HS 317, HS 349 or HIST 349 may not take this course for further credit. Breadth-Humanities. 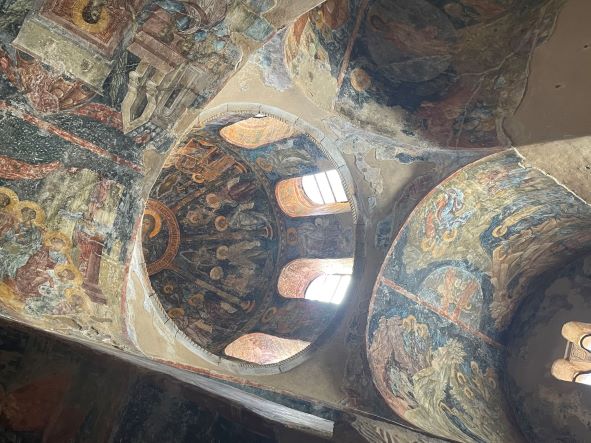 This is a history of the Roman Empire in the Middle Ages. The Middle Ages you said? Well, Byzantium, was Rome's heir and this course familiarizes students with the social, political, economic, and cultural history of Byzantium from the rise of the Caliphate in the seventh century to the Carolingians, the Crusades, the emergence of the Italian maritime republics and the ascent of the Seljuk Turks.

In this course then we study Roman history in the Byzantine era, from the seventh to the thirteenth century. By covering some seven centuries it necessarily deals with much change. When we start, Byzantium is entering the so-called “Dark Ages”. In the coming two centuries of blood, sweat, and tears the empire survives the challenges of Arab threats, Bulgarian incursions, internal dissent – both political and religious. The tenth century is a period of military glory and conquest that makes Byzantium the dominant power of the Mediterranean. In the eleventh century the Byzantines face the explosive militarism and piety of the Crusaders and by the 13th century that encounter leads to blood and destruction. Byzantium survives but by the end that polity is a ghost of its old self, confined to the walls of Constantinople and to some lands in Greece. The fleets of Italian city-states, the monarchy of France and Spain and the empire of the Ottoman Turks rule the new world in which it exists.

Over the course of the semester, we will follow much change in Byzantine society. We will talk about Medieval Romans (Byzantines) of all walks of life, men, women and eunuchs and we will study their history, culture, and society. To go deeper into the study of Byzantine history we will read primary sources, which you will be called to interpret, understand, and contextualize. Those sources and other useful resources will be found on the course website. We will discuss them in class.

We will also be using as support for our lectures and for class discussions Peter Sarris’ Byzantium: A Very Short Introduction (Oxford, 2015) (available online at the SFU Library). Chapters of this book will provide an alternative narrative to the material presented in lecture, while framing our reading of the assigned primary documents. The aim is not to memorize this book. Rather, by reading the assigned chapters from this book you reinforce what you learn in lecture and acquire supporting material with which to frame your reading of the primary sources.

Your personalized Course Material list, including digital and physical textbooks, are available through the SFU Bookstore website by simply entering your Computing ID at: shop.sfu.ca/course-materials/my-personalized-course-materials.

SFU’s Academic Integrity website http://www.sfu.ca/students/academicintegrity.html is filled with information on what is meant by academic dishonesty, where you can find resources to help with your studies and the consequences of cheating. Check out the site for more information and videos that help explain the issues in plain English.

Each student is responsible for his or her conduct as it affects the university community. Academic dishonesty, in whatever form, is ultimately destructive of the values of the university. Furthermore, it is unfair and discouraging to the majority of students who pursue their studies honestly. Scholarly integrity is required of all members of the university. http://www.sfu.ca/policies/gazette/student/s10-01.html