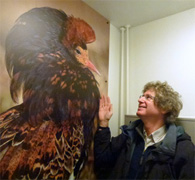 Behavioural ecology in population and conservation contexts. I focus on the evolutionary ecology of animal mating and parental care strategies and systems. I examine sources of within species and within-sex variation in strategies to test models of current adaptive significance, in a context of comparative studies, to shed light on the evolutionary origins of characters. I combine observational and experimental approaches to science. I have a specialized interest and expertise in birds with precocial young, such as shorebirds and waterfowl.

Specific interests include (1) alternative breeding strategies, including a genetic dimorphism in the mating behavior of male Ruffs, a lekking sandpiper, (2) year-round population biology of shorebirds, including breeding, migration, and non-breeding systems (Western Sandpiper, Dunlin, Red-necked phalarope, Temminck's stint), with with basic biological and conservation applications, and (3) conservation biology of Marbled Murrelets and the Tuamotu Sandpiper in French Polynesia.

I am currently involved in 4 major research areas:

If download is not on this page, look here :

Maintenance of Polymorphisms in Ruffs:

Mode of Inheritance and Genomics:

Samantha is a researcher with the British Trust for Ornithology. Guillermo is a professor at the Instituto de Ciencias del Mary Limnología, UNAM Unidad Académica, Mazatlán, Mexico.

David Lank, a.k.a. Dov, has asked questions about human and animal behavior for as long as he can remember. His memories begin around the summer of 1969, during which he went to Bethel, NY (quiz time.. why? ), Merrit Island, FL (quiz again), and hitch-hitchhiked across North America. After 2 years of coursework in psychology and anthropology at Columbia University, he concluded that neither field had satisfactory paradigms and tools for studying behavior, so he changed locations (to Marlboro College, VT) and organisms. The summer of 1972 spent at Bowdoin College's research station at Kent Island , Bay of Fundy, transformed him into a field biologist and began his inordinate interest in sandpipers. In approximate chronological order, he has subsequently investigated orientation mechanisms, migratory ecology, breeding biology, mating and parental care systems, population biology and behavior genetics of various sandpiper species, and the conservation biology of Marbled Murrelets. While doing so, he obtained a MS degree from the University of Minnesota, a PhD from Cornell, with Steve Emlen, and hung out in North Dakota with Lew Oring, The Ohio State University with Jerry Downhower, at Queen's University, Kingston, with Fred Cooke, and at Simon Fraser University with the Behavioural Ecology Research Group and the Centre for Wildlife Ecology . Since 1984, he and his spouse Connie Smith have delved into the maintenance of a behavioral polymorphism in male mating strategy of Ruffs, a peculiar Old World sandpiper, which he considered to be the most interesting bird in the world, and became even more interesting with the discovery of permanent "female mimic" males in the species. The ruff work included 6 field seasons in Finland and the maintenance of a pedigreed breeding flock since 1985, currently numbering ca. 350 birds spanning 16 generations. He has organized the "Western Sandpiper Research Network" and is active in the conservation biology of shorebirds, including the endangered Tuamotu Sandpiper, and of Marbled Murrelets