Haida houses were rectangular. They averaged between 25 and 33 meters long and could be up to 17 meters wide. Some were smaller in length and in width and some were larger. They all varied. Haida houses had a pitched roof.

Note: This model shows different stages of construction. A completed longhouse would be covered with sheets of bark as seen in the middle section of the model.

Huron longhouses were quite similar to Haida houses in length and width. They also averaged between 25 and 33 meters long and could be up to 17 meters wide. Longhouses are almost rectangular, but are more rounded at the ends. The roof can be arched or pitched.

Igloos were a lot smaller than the other two types of houses. They were usually between 3 and 6 meters in diameter and were a dome shape. Some had more than one room and some were joined to another igloo by a hallway. Igloos could not be very big because they would be impossible to keep warm.

Did they all have smoke holes? If so, how were they different? 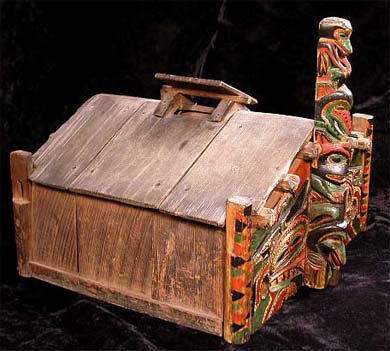 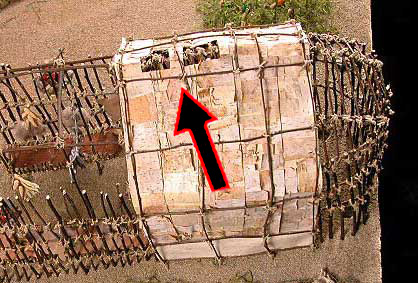 Igloos had small smoke holes because they had only a small fire in a kudlik stone lamp.

Sometimes Haida houses had smoke holes in the top that had a board propped up to protect the opening from rain and snow (as pictured above left). The planks that formed the walls were not tightly latched together so moss was used to seal the spaces. The moss was removed when the house was too smoky.

Some Huron longhouses had holes cut in the top of the roof, which were also covered with either bark or hides to protect the inside from the rain or snow (as pictured above right). Although similar to the Haida house, the longhouse did not need a smoke hole because there were enough small openings between the poles to let the smoke out.

How many fires were there?

Igloos had no fires because there was not much firewood in the arctic. Some driftwood might have washed up on the shores, but if the Inuit did not live close to the sea, they would not have found it. Besides if they had a fire in a house made of ice and snow, what do you think would happen? It would melt the entire house! So oil lamps were used and these lamps did not give off the same amount of heat. If the inside of the igloo got too warm, the igloo would start to melt and the cold water would drip down on to the people inside. However, body heat from two or three people would keep the igloo comfortable because the snow acts as an insulator to keep the heat in.

Longhouses had many fires. One fire was shared between two families. Some longhouses had up to six fires. Each family did their own cooking on their fire.

Haida houses generally had one central fire in the floor of the house. The bottom floor was where all the cooking and the social events, like playing games, happened. The others levels were used more for a living and sleeping area. Each family had its own compartment for privacy.