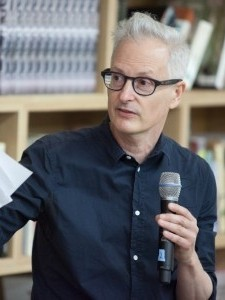 Jeff Derksen’s research and teaching interests revolve around issues of culture, space, politics and contemporary poetics and art. Following his doctoral work on globalization, national cultures, and multiculturalism, he worked on urbanism and globalization (with a focus on gentrification and the transformation of cities) and on the cultural and spatial aspects of the long neoliberal moment. This work is collected in two volumes: Annihilated Time: poetry and other politics and After Euphoria. His related teaching and research include cultural studies, Asian North American poetics and critical theory. A series of linked essays on scale, urbanism, and the nation-state in Canadian literature have appeared in the anthologies, Material Cultures (ed. Thomas Allen and Jennifer Blair), Transnationalism, Activism, Art (ed. Aine McGlyn and Kit Dobson) and Shifting the Ground of Canadian Literary Studies (ed. Smaro Kamboureli and Robert Zacharias). He has published articles and columns in Public, Springerin, Camera Austria, Fillip, Open Letter, West Coast Line, Hunch, and he recently blogged on photography for the German Pavilion of the 2015 Venice Biennale. He has written catalogue essays for artists such as Stan Douglas, Brian Jungen, Alfredo Jaar, Holly Ward, Kevin Schmidt, Andrea Geyer, Denis McNulty, Ian Wallace, and Sam Durant.

In 2004, Jeff formed – with the artists Sabine Bitter and Helmut Weber -- the research collective, Urban Subjects, whose work on cities, militancy, and autogestion has been presented in the form of edited volumes, bookworks, curated exhibitions, public posters, situations and para-academic seminars. He has also been involved in long-term research projects such as “Networked Art Histories” (SSHRC, Concordia), “Justice, Citizenship and Vulnerability: Precarious Narratives and Intersectional Approaches” (La Laguna, Spain), Canada and Beyond (Vigo, Spain), and “Researching the Militant Image” (with Urban Subjects as Artists in Residence at Leuphana University, Germany). He currently serves on the editorial broads of Amodern (Montreal) and Canada and Beyond (Huelva, Spain). Jeff was a Fulbright fellow at City University of New York in 1999 and was later a research fellow at The Centre for Place, Culture and Politics (2001-2003) where he worked and collaborated with the geographer Neil Smith.