THE SOCIAL CONTEXT OF DOLLS more  -->

There is a lot to be learned from dolls in terms of their social context.  Research has found that “the doll as not just a plaything, but as an object intimately linked to identity; considering image, form, symbol and meaning” (Donaldson 2012).  Indigenous people through out the Americas used dolls in medicine ceremonies, to represent fertility goddesses, to accompany the dead as well as toys for children.   There is a rich history of doll making in the Americas as seen in kachina dolls, Chancay dolls, cornhusk dolls and the Zapatista dolls of Peru.  However little written information has been found on the history and significance of Bolivian dolls.

We can gain understanding by looking at the social circumstances of colonial Bolivia and by making certain assumptions.  The first assumption is that women made dolls and the second was that doll making was an integral part of Bolivian folk art traditions.  “Bolivian folk art is created in both urban and rural areas, and like the people of Bolivia themselves, it bears a strong indigenous imprint” (Arze 2004).   We know that during the early 1900’s in the highlands of Bolivia, men moved from farming into wage job offered by colonial economies such as silver mining operations.  As a result women often took their traditionally made textiles to the markets that catered to the emerging tourist trade.  The dolls in the Bolivian doll collection are dressed in culturally significant clothing showing  the importance of Bull fighting as well as textile making.  It is noted that most of the dolls wear hat similar to those worn by Bolivian women of the highlands during the colonial era and they continue to be part of traditional dress today. 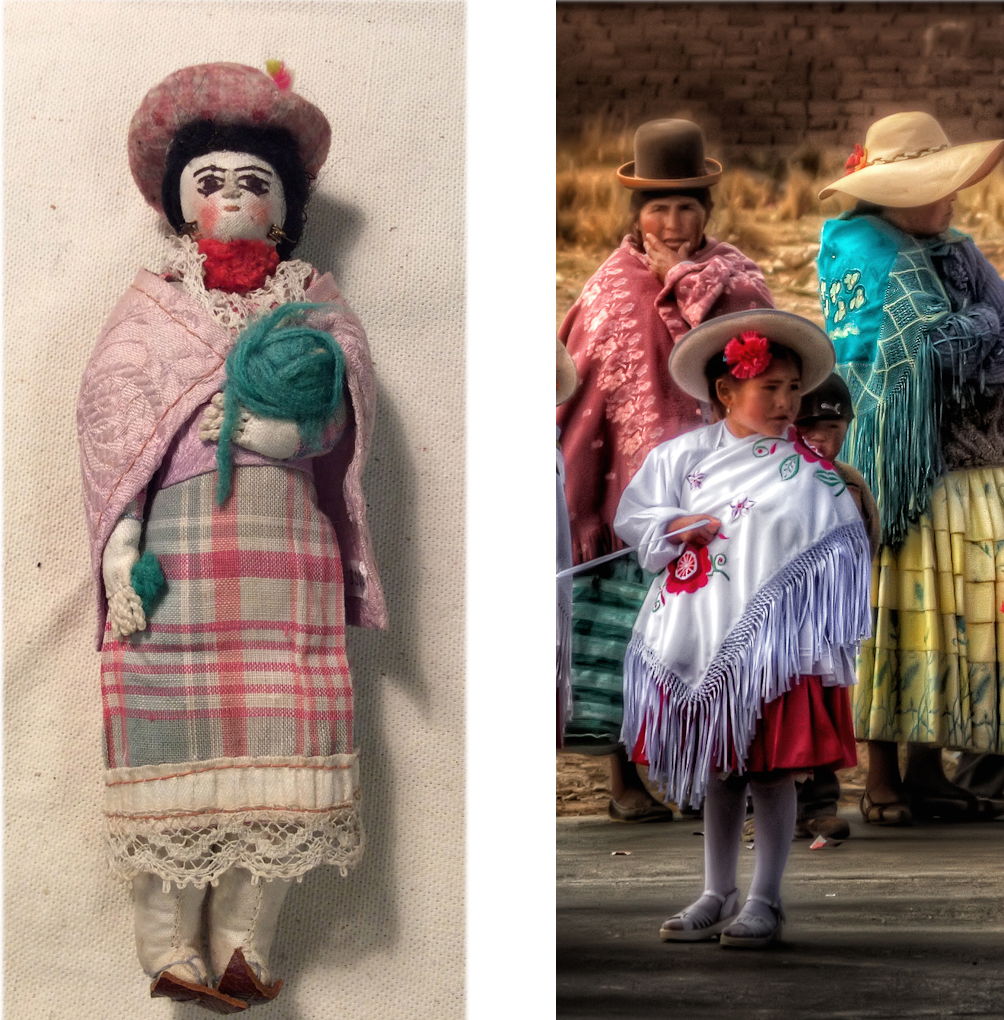 HISTORY OF THE COLLECTION

Naomi Miller of Delta, BC, donated the collection to the Simon Fraser University Museum of Archaeology and Ethnology in 2008.  Her neighbour had collected these items between 1905 and 1913 during visits to a highland Bolivian silver mining town.  Unfortunately not much more is known about this collection, though it has been suggested that these dolls could be from Tarabuco because the style of clothing is quite similar  Since their donation the miniature doll collection has been stored on the museum archive shelves where they were stored  in a plastic container with each doll individually wrapped in acid free tissue.   The Bolivian Doll collection has never been displayed in the Simon Fraser University Museum of Archaeology and Ethnology prior to this project.

On to: Methods of Manufacture