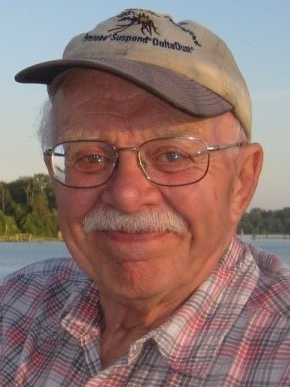 Peter Belton came to SFU in 1967 as part of Bryan Beirne's group from Belleville, Ontario, and became one of the founding members of the Masters of Pest Management Program. Before moving west, Peter had been teaching electrophysiology as an adjunct at Queen’s University, and was a research scientist and group leader at the Agriculture Canada Research station.

Once he had settled into SFU, Peter and his family settled into a home near the University. Peter adored his family. His wife Elspeth was truly the love of his life; his face lit up when recounting adventures they had through the years, and his attention would go immediately to her when she entered a room. He was deeply proud, but not in a pretentious way, of his three children, and always spoke fondly of spending time with his grandchildren.

While at SFU, Peter taught a wide variety of courses: Ecology and Population Explosion, General Biology, Cell Biology, Evolution, Animal Physiology, Urban and Industrial Pest Management, and Physical Controls. He was also part of SFU’s Disease Research Group and did a lot of work with West Nile Virus. Peter and Elspeth both edited for the Entomological Society of B.C., and Peter received many requests from journals around the world to review papers on bioacoustics and mosquitoes.

Peter often said his studying mosquitoes had allowed him to travel the world and meet incredible people. Mosquitoes intrigued Peter. He respected them, and wanted to learn their secrets. Even after he retired in 1994, Peter did research in the lab he set up in his basement, and participated in a number of thesis committees, working with numerous researchers right up until his death. Although Peter was probably best known for his mosquito research, thanks to his 1983 book on the mosquitoes of B.C., he was not limited to that research; he was interested by everything in life, but gravitated toward all things related to insect acoustics.

His early research influenced Peter’s future research interests. He studied entomology in the Applied Entomology Program at Imperial College, London. His research on tiger moth tympanal organs yielded recordings from moth tympanal nerves. His first publication, detailing these groundbreaking recordings, was published in Nature. Peter then did his PhD in Glasgow, focusing on the nerves and muscles of the Lepidoptera leg; he moved to Columbia University in New York to finish his research. Unfortunately for Peter, moths weren’t available to purchase in New York, so he shifted his focus to mealworm muscles, because the larvae were readily available from local pet stores. He also did some work on the slow muscles of frogs, which were somewhat similar to insect muscles. His breakthrough research showed that action potentials in the mealworm muscles could be produced with potassium. Bioacoustics and electrophysiology remained life-long passions.

Peter himself said that he had led a full life; he seemed to have boundless energy, and deeply appreciate each day that he had. Thus, when he died on April 1, 2019, it seemed far too soon. There was so much to study and learn, more research to do, more scenic drives to have, and more time to share with family and friends. Peter was a true gentleman. He treated everyone as equal, was a patient teacher, encouraged original research, and never spoke poorly of others. Over his years at SFU and then through all the work he did after retirement, Peter touched the lives of many, and is deeply missed by those fortunate enough to have known him.

Photo:
Peter and Elspeth enjoying a meal with Thelma Finlayson at the Gillnetter: one of their favourite scenic spots.