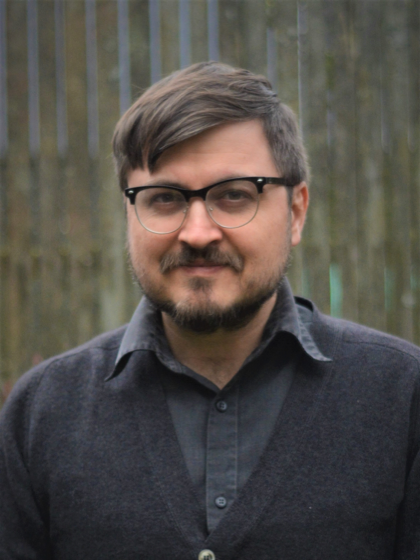 Darren Byler is a sociocultural anthropologist whose teaching and research examines the dispossession of stateless populations through forms of contemporary capitalism and colonialism in China, Central Asia, and Southeast Asia.

His monograph, Terror Capitalism: Uyghur Dispossession and Masculinity in a Chinese City (Duke University Press, 2021), examines emerging forms of media, infrastructure, economics and politics in the Uyghur homeland in Chinese Central Asia (Ch: Xinjiang). The book, which is based on two years of ethnographic fieldwork among Uyghur and Han internal male migrants, argues that Chinese authorities and technologists have made Uyghurs the object of what it names “terror capitalism.” It shows that this emergent form of internal colonialism and capitalist frontier-making utilizes a post-9/11 discourse of terrorism, what he shows produces a novel sequence of racialization, to justify state investment in a wide array of policing and social engineering systems. These techno-political systems have “disappeared” hundreds of thousands of Uyghurs and other Turkic Muslims in “reeducation” camps and other forms of productive detention while empowering millions of state workers and private contractors who build the system. The book considers how the ubiquity of pass-book systems, webs of technological surveillance, urban banishment and mass internment camps have reshaped human experience among native Uyghurs and Han settler-colonizers in the capital of the region Ürümchi. Ultimately, the book presents an analysis of resistance to terror capitalism, what he terms a “minor politics of refusal,” that emerges from the way Uyghurs and Han allies use new media and embodied practices of care taking to oppose this colonial formation.

His current research follows up on the argument of his first book to consider how contemporary capitalism and colonialism travels through digital infrastructural systems from China to Malaysia. This multi-sited project, supported by funding from Columbia University's Global Reports series and a Luce Foundation and American Council of Learned Societies Early Career Fellowship involves field research and in-depth interviews with technology workers, former detainees and other stateless Muslim populations affected by the infrastructural power of digital surveillance along China’s New Silk Road. The project will result first in a narrative-driven book titled In the Camps: China's High-Tech Penal Colony (Columbia Global Reports 2021). Drawing on ongoing fieldwork with stateless populations in Kazakhstan and Malaysia this initial publication will then be expanded into an academic monograph that focuses on infrastructural state power in the context of global China.

In public-facing work regarding the crisis confronting the Uyghurs and others in Northwest China, he has worked in an advisory capacity with faculty and researchers at the University of British Columbia and Simon Fraser University to build a Xinjiang Documentation Project featuring personal testimonies and archives, internal police reports, translations and other documents concerning the ongoing detention of Turkic Muslims in China and the erasure of their native knowledge. He also writes a regular column on these issues for the journal SupChina, as well as essays for other public outlets such as the Guardian, Noema Magazine, and ChinaFile. He has also been asked to contribute expert witness testimony on Canadian and Australian foreign policy issues before the Canadian House of Commons and the Australian Parliament, and he has written policy papers on technology and policing for the Wilson International Center for Scholars and the University of Pennsylvania's Center for the Study of Contemporary China. As part of his work in amplifying the voices of Uyghur cultural leaders he has co-translated a Uyghur language novel titled The Backstreets (Columbia University Press 2021). The novel is written by a leading modernist author Perhat Tursun who disappeared into the internment camp system in Northwest China 2018.

“New Silk Road artworlds: The art of the hybrid and the marginal at the Xinjiang Contemporary Art Museum” (Journal of Contemporary Chinese Art, 4, no. 1: 27-43, 2017).

“The Traveler in the City: Homelessness and the Religious Economy of Uyghur Reformist Islam” (In Ethnography of Islam in China, Rachel Harris, Guangtian Ha, Maria Jaschok eds. University of Hawaii Press, 2020).

“The Affect of ‘Disposable’ Bodies on Film in Xu Xin’s Karamay: Ritual and Embodiment in Chinese Central Asia” (In Transnational Chinese Cinema: Corporeality, Desire, and the Ethics of Failure, Hong Kong: Bridge21/Transaction Press, 2014).