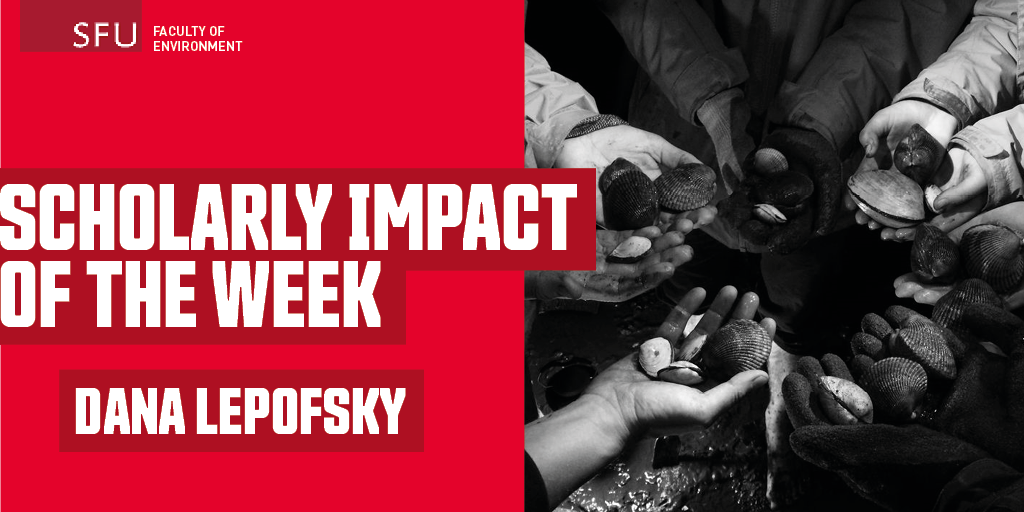 Ancient clam gardens can be found all over the Northwest Coast, from Washington State to Alaska.  The knowledge and stories contained within them have long been known to Indigenous communities. Yet only recently have university researchers begun to study clam gardens and other aspects of Indigenous marine management systems.

Archaeology professor Dana Lepofsky studies the relationships of Northwest Coast Indigenous Peoples to their environments, past and present. She counts herself very lucky to work with First Nations as equal partners in research programs that have aided in the revitalization and appreciation of traditional knowledge, while also helping to educate future generations.

Working with researchers from the Wei Wai Kum and We Wai Kai First Nations, the Haikai Institute and others, Lepofsky recently completed a comprehensive survey of ancient clam beds along the northern coast of Quadra Island, British Columbia within the traditional territory of the southern Kwakwaka’wakw (Laich-kwil-tach) and northern Coast Salish First Nations.

The researchers found that over one third of the shoreline had been used for clam garden construction– habitat expansion that would have supplied an abundant and sustainable food source. Her paper, Ancient Anthropogenic Clam Gardens of the Northwest Coast Expand Clam Habitat, adds to the growing body of literature about the extent and legacy of ancient ecosystem management.

Northwest Coast clam gardens are constructed rock-walled beach terraces that create shallowly sloped intertidal shelves where littleneck and butter clams thrive. The clam gardens of Kanish Bay and Waiatt Bay on Quadra Island had among the highest density of clam gardens anywhere on the coast. SFU research led by Dr. Anne Salomon and her students determined these strategically constructed beach terraces were still productive today – and up to three times more productive than non-walled clam beds.

Clam gardens are difficult to find and study as they are built in the lowest low tide areas of beaches; thus they are only accessible for research in places like Quadra Island for very few daylight hours a year.  For instance, in the month of July, the tides were only low enough to do research on the gardens for about 40 hours – spread out over 13 days.

In this latest study, Lepofsky’s team used modeling, high-resolution mapping, beach sampling and a comprehensive survey to document the extent of the clam beds. They found that the Indigenous Peoples built clam gardens on over one third of the shoreline, creating roughly 113,000 square metres of new beach terrace, enhancing clam habitat by up to 36 per cent. This included expanding existing clam beds on soft-sediment beaches, building walls on bedrock outcroppings and levelling out rocky slopes to create terraces. The use of even the smallest areas for clam gardening points to the intensity of food production. “This is amazing because it’s not just that people were making already productive clam beaches more productive, it’s that they also regularly created highly productive clam beaches where no beach - and no clam habitat - existed before,” says Lepofsky. As sea levels rose and fell over the millennia, the gardens were repositioned to maintain ideal clam habitat.

Radiocarbon dating of the ancient settlements in the study area date back over 9000 years. In Kanish and Waiatt Bays, Lepofsky and her team demonstrated that approximately 3500 years ago there was an increase in human population which coincides with the initiation of clam gardens. Construction drops off after European contact in the late1700s, as a result of a myriad of dramatic disruptions associated with European colonization, including population decimation from introduced diseases.

By speaking with First Nations elders and knowledge keepers, researchers learned how the gardens were painstakingly maintained. They were weeded, selectively harvested, and kept free of predators such as sea birds and raccoons. First Nations collaborators also suggest the garden walls themselves provided productive habitat for octopus, sea cucumber, whelks, chiton, red turban snails and other valued food sources. As such, some coastal groups refer to them as “sea gardens” and not just “clam gardens.”

This latest publication from Lepofsky and colleagues adds to the growing body of literature documenting long-term Indigenous stewardship of natural resources here in coastal British Columbia and globally. Such research highlights the importance of learning from traditional knowledge to help meet today’s global challenges such as loss of food security. A first step towards incorporating this knowledge into current marine management is recognizing the extent of these practices in the past, and their legacies on the landscape today.

Dana Lepofsky’s passion for Northwest Coast communities and coastal environments led her to become one of the coordinators of the Clam Garden Network and the Herring School, collectives of people from Indigenous and academic communities, government and non-governmental organizations, across the Pacific Northwest who recognize the significance of Pacific herring and clams as cultural keystone species. The collectives share ideas, research approaches, tools, and data on how people used marine resources and ecosystems. They’ve created a website on herring (www.Pacificherring.org), a how-to guide on recording clam gardens, and are currently creating a teachers’ guide to bring clam gardens into the classroom.

One of the key initiatives of the Clam Garden Network is the Sea Garden Restoration Project in the southern Gulf Islands – led by the Hul’q’umi’num and WSÁNEĆ peoples, in partnership with Parks Canada, Royal Roads University, SFU, the University of Saskatchewan and many volunteers. The restoration of two sea gardens has incorporated traditional and scientific knowledge, and intergenerational knowledge sharing. This is just one example of sea garden restoration currently underway among Native Americans and First Nations of the Northwest Coast.

The Clam Garden Network is also currently hosting an Indigenous focused webinar series, discussing themes that include food security, food sovereignty, and First Nations governance. Several communities along coastal B.C. are leading the conversation, which focuses on the best ways to utilize this ancient knowledge for the well-being of the people in whose territories they are situated.

“I’m so very fortunate to have been able to work with Indigenous Peoples, academics, and other partners to blend local ecological and historical knowledge with archaeological data and apply this knowledge to issues of today,” says Lepofsky. “However, what is most exciting for me these days is being able to fully support Indigenous leaders to take over the conversation in the way that they want to see it happen.”

“The Clam Garden Network is firing on all cylinders right now,” she adds. “Working with Indigenous knowledge holders, and recognizing the extent of their knowledge is a fundamental step to doing not just better science, but more socially just science.”

New science innovations to address Parkinson’s and other diseases