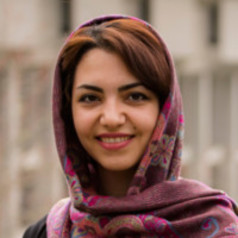 S  At the 2019 SFU Awards Dinner on March 6, FATEMEH TORABI ASR , Affiliate Researcher with the Discourse Processing Lab, received the 2019 President's Emerging Thought Leaders Newsmaker Award. This award recognizes Asr's article on fake news identification in The Conversation that has received over 69,000 views.

> THE LANGUAGE GIVES IT AWAY: HOW AN ALGORITHM CAN HELP US DETECT FAKE NEWS

> SFU RECOGNIZES ITS TOP NEWS MAKERS OF THE YEAR

S  On March 5, Professor MAITE TABOADA presented at the Annual Women in Data Science Vancouver conference held in the Microsoft building in downtown Vancouver. Taboada gave a talk about the Gender Gap Tracker which measures the ratio of female to male sources quoted in Canadian news media.

S  Our department was well represented at the 38th annual West Coast Conference of Formal Linguistics (WCCFL) the weekend of March 6 - 8. WCCFL is a premier theoretical linguistics conference held every year in North America. This conference was hosted at SFU in 2005 and 2015.

Lecturer MEG GRANT was a keynote speaker at this year's conference. Keynote speakers at WCCFL are the most prominent scholars in the field and we would like to congratulate Grant on her highly regarded research and excellent presentation.

Abstract:
The processing of polysemous words has been of interest in psycholinguistics because it bears on the question of what semantic commitments the human sentence processing system makes during real-time comprehension. The Minimal Semantic Commitment hypothesis (Frazier & Rayner, 1990; Frazier, Pacht and Rayner, 1999) posits that semantic commitments are only made if they are necessary or invited. Support for this hypothesis is drawn from diverging patterns for different types of polysemy. The processing of lexical polysemy (e.g., related concrete and abstract senses of a word) has shown that comprehenders leave representations underspecified (although see Fishbein & Harris, 2014). However, for so-called rule-based polysemy (e.g., mass and count uses of nouns, see Frisson & Frazier, 1995), which involves grammatical differences, evidence suggests immediate commitment to a single meaning. Because rule-based polysemy influences the compositional semantics of a word with its context, whereas lexical polysemy does not, a principle of Minimal Semantic Commitment accounts for these results.

In this talk, I extend the empirical domain of the study of processing polysemous elements. I will discuss cases wherin it is unclear whether there is polysemy at the lexical level or whether the related meanings arise from a structural/grammatical distinction. Included in these cases are degree achievement verbs (such as open, widen) and deverbal nouns (such as obstruction) in German and in English. I will suggest that examining both the theoretical analyses of these elements and their processing is important to our understanding of polysemy from linguistic and psycholinguistic points of view.

S  On March 5, students from Fraser International College (FIC) came into the department for a tour of our research labs. Lab directors and research assistants got to show off some of the ins and outs of working in linguistic research.

S  The department colloquium series continued throughout March with three lectures. On March 4, former SFU student and current Associate Professor at the University of Calgary DENNIS STOROSHENKO gave a lecture entitled "'Most people only care about themselfs': form and function variance in English Th-Reflexives."

Professor NICOLE DEHÉ from the University of Konstanz gave two lectures while in Vancouver. The first lecture took place on March 12 and was titled "Prepositions and the Relative Vulnerability of Lexicon and Morpho-Syntax in Heritage Icelandic." Dehé's second lecture on March 13, "A Cross-Linguistic View on the Prosody of Rhetorical Questions," was part of the LinguisticsNOW colloquium series co-hosted by the University of British Columbia.