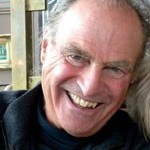 Graham Forst has an interdisciplinary PhD in literature and philosophy. His doctoral thesis was examined by Northrop Frye in 1970.

He has published several articles on literary criticism and writes reviews for UBC’s journal Canadian Literature, and for the Jewish Independent newspaper. In 1975, he founded the Vancouver Holocaust Education Committee, which he chaired for 35 years.

He is a recipient of the Canada 125th Anniversary Medal for Social Activism and has received numerous civic awards for his work in anti-racism.