x
close
This photograph taken by Rick McGrath in August 1965 shows a campus still very much under construction (note the worker with the wheelbarrow in the bottom right corner).

Large empty spaces, construction crews everywhere…those who have been up on the Burnaby campus during the pandemic may have some idea of what it was like for its very first students in 1965. One of these students -- known as “charter students” -- was Rick McGrath, who recently donated a number of photographs, documents, publications and other material relating to his time at SFU as a student in the 1960s.

While we have many records documenting the University’s history from an administrative or departmental point of view, we have far less material from the student perspective. Several recent donations of archival material from charter students are important in ensuring that a more complete picture of SFU’s past is preserved. For instance, McGrath’s personal archives document his involvement with The Peak in many roles, including sports editor, music critic, and editor of its precursor SFView;  his participation in the infamous occupation of the Administrative Building in 1968; and entertainment on campus, like visits by the San Francisco Mime Troupe and comedian Pat Paulsen.

Photographs from McGrath’s time at The Peak document people, spaces, sports teams, events on campus, and even the paper’s staff themselves. In addition to numerous SFU buttons, his archives also includes those he wore in support of anti-Vietnam War activism and the women’s movement on campus. Other gems include a rare copy of a June 1969 publication titled Horse Sheet, relating to a controversy in the Centre of Communications and the Arts, and the first issue of SFU Literary Magazine.

Helena Keizer’s photographs of herself and fellow classmates posing during breaks at a colloquium in Washington State in 1966 are not so different from the Instagram posts of today, and provide a rare glimpse into student life away from campus. 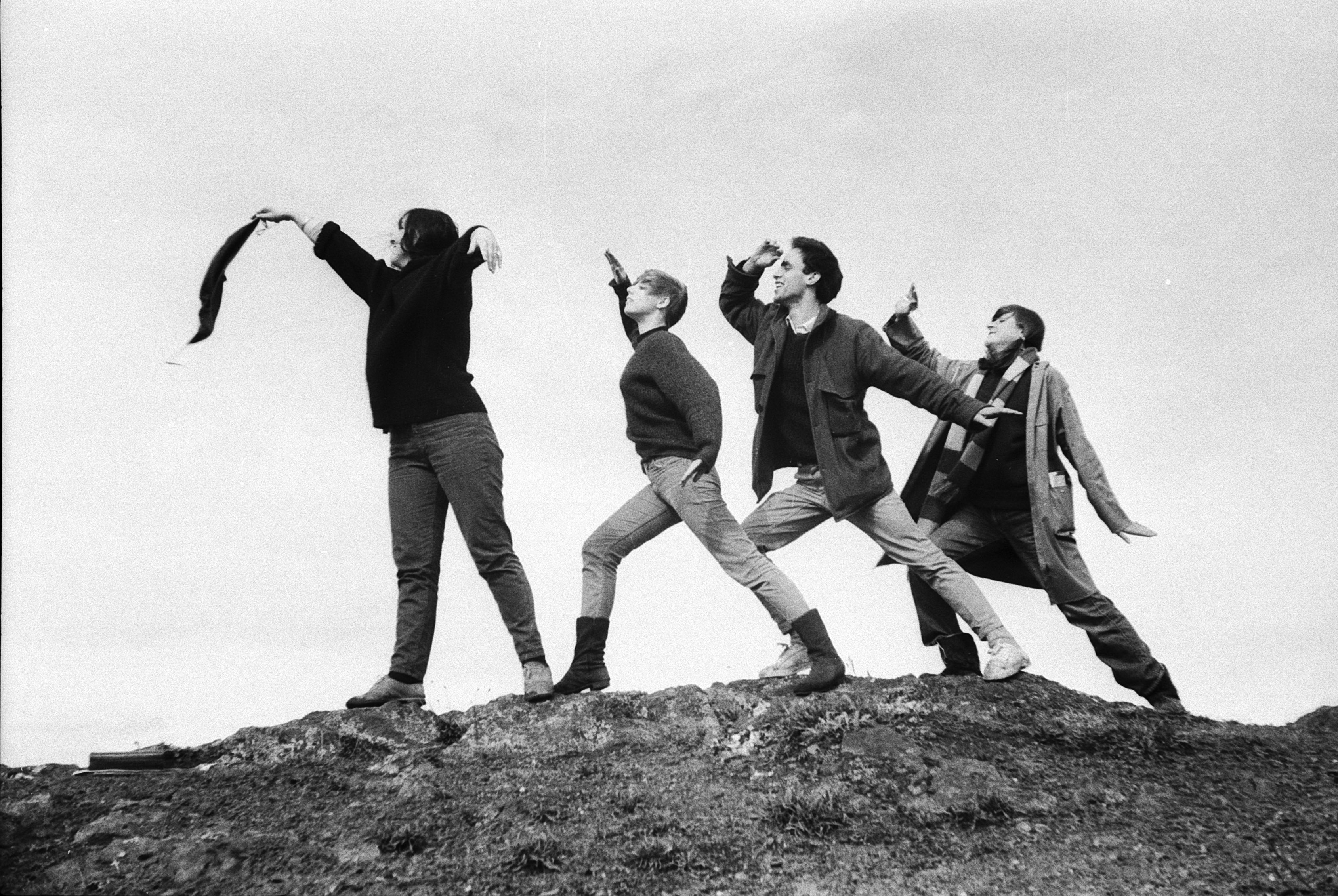 As a charter student living in Madge Hogarth Residence and studying towards a Bachelor of Arts degree, Sandy Wilson captured her experiences in the sketches and poems she sent home to her parents. She frankly described her fellow students and professors, her hopes and feelings, and even the tourists that came up to see the new university on the mountain.

"Color most of the profs and a few of the students living in their own world / A world of bugs and chemicals, plants and growing things, avant-garde poetry...Shakespeare's plays, 'Napoleon and...Martin Luther 'King', Money and Business, or just 'plain' people. But do color most of the prof [sic] and a few of the students very alive and concerned."

An early participant in the SFU film workshop, Wilson went on to a career as a successful filmmaker, receiving international acclaim for her 1986 film My American Cousin. 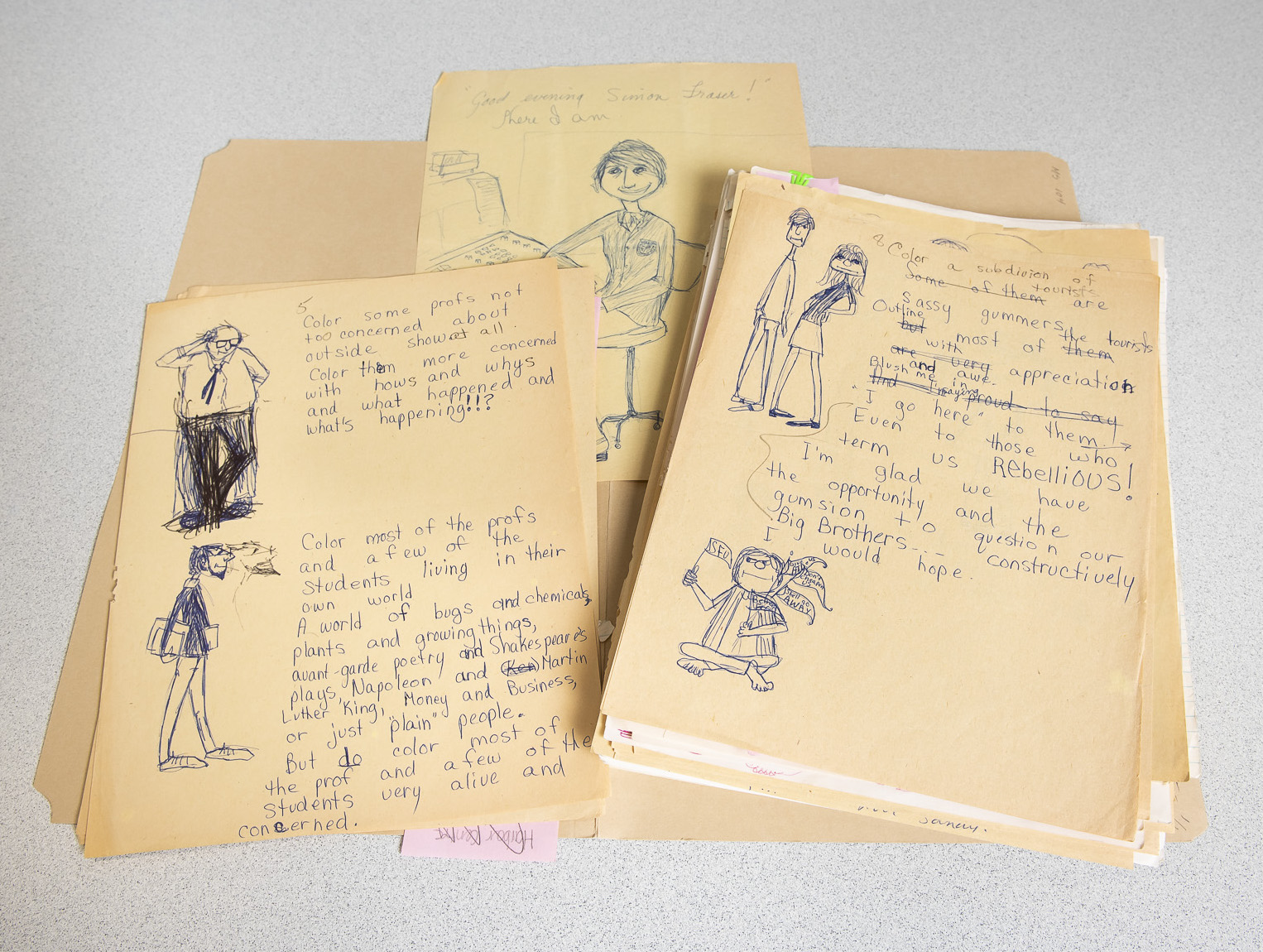 In addition to material documenting alumni’s time at SFU, we also acquire records relating to their activities and accomplishments later in life and their contributions to the greater community.

After graduating from SFU, McGrath applied his experience gained at The Peak to a career in journalism, publishing and marketing. He was the entertainment editor and rock critic for The Georgia Straight from 1969-1972, a writer for the underground papers The Grape and Terminal City Express and assistant editor of the Richmond Review before establishing a career as an advertising and marketing executive. His fonds includes material documenting all of these activities, including an audio recording of his interview with a very young Sir Elton John.

I had the opportunity recently to turn the tables on McGrath and interview him about his archives. You can read the interview and get the 'real scoop' on what SFU was like in its earliest days in Part 2 of this post.