x
close
Some of the many buttons Rick McGrath accumulated while a student at SFU in the 1960s.

When acquiring records from their creator, it is always preferable for the archivist to get as much contextual information as possible to help future researchers understand the records and how they were created. I had the priviledge to interview Rick McGrath about his recent donation of records to the SFU Archives, described in Part 1 of this post:

MH: How do the records represent your experience as a charter student at SFU?

RM: Well, we wore a lot of buttons! Obviously, we were a fairly argumentative bunch, but in hindsight I think that’s because there were no traditions at SFU for students, faculty or staff to affirm or adhere to… it’s quite exciting when everyone is trying to make it up at the same time! The speed at which SFU was invented also meant there were more than just cracks in the concrete — the whole structure was attempting to “settle” into the SFU way of doing things — which often meant the opposite of UBC.

MH: How do the records represent SFU at that time?

RM: If you mean “that time” as the 1960s, then again my contributions from those days reveal some of the power struggles that were going on and the student reaction, which mainly was confused but vociferous. I also think that few people at that time ever thought much about creating a “history” of SFU… which may be why so little still remains — ephemeral even at the time as people and concerns changed and evolved.

MH: Is there anything in your archives that you feel will surprise students today?

RM: Perhaps the early visuals… those small colour photos of the early campus were taken in August of 1965, probably during my first trip to SFU to obtain enrolment papers. You can see how “unprepared” the place is. The idea of creating four sports “houses” for intramural play might also seems rather odd today. And the fact we were around 2,000 in total would seem odd. I think there were high schools in Vancouver with more students…

MH: Among your records is a copy of the famous 1968 notice re: vacating the Administrative Building -- how did you acquire this?

RM: Easy… I was in the Admin Building when the cops shoved a few handfuls of the notice through the door. Nearly all The Peak staff were in the building and when the RCMP arrived we had [a] quick meeting and it was decided a photographer (Roy Beaumont) and a columnist (George Reamsbottom — I think) stayed [sic] behind to report on being arrested. The rest of us went back to The Peak office and started pumping out the next paper. Even at the time I thought this was an interesting document, so I just filed it away. 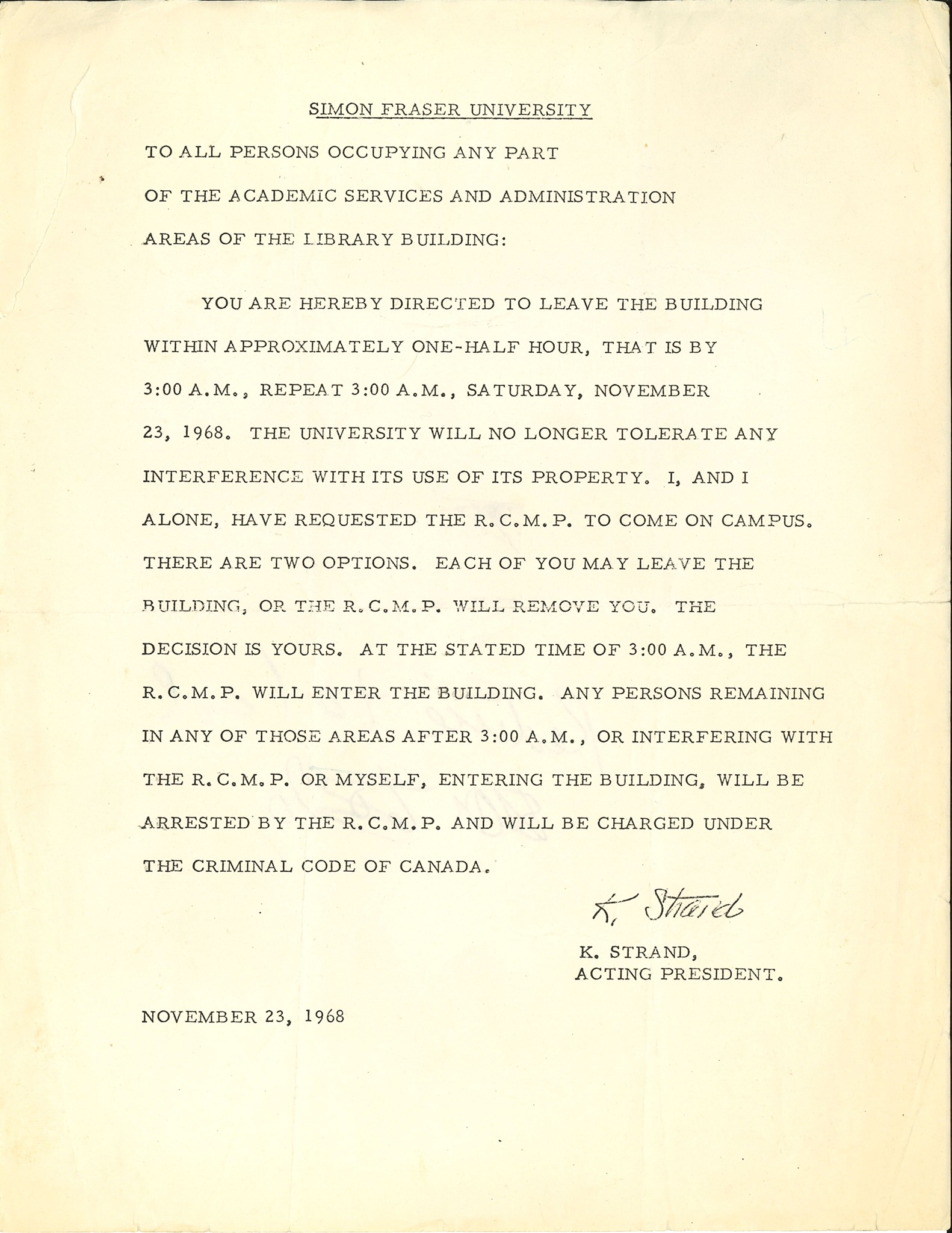 McGrath's copy of the famous Strand notice
MH: What are your favorite items in this donation, and why?

RM: I’d say the stuff from the 60s… some is artistic creative, a lot politically creative. I wish I had saved more, but it’s hard to think ahead 50 years when you’re in your early 20s. “SFU Komix” I think was drawn by Bob Mercer — he did a lot of political art, like “The Little Man”… I guess my favourite is the Strand Notice… probably not a lot of them around and that event was history-making for SFU.

MH: Why should the SFU community care about the University’s past?

RM: I don’t think they do… it’s mostly seen as a messy, confused time with fire-breathing radicals converting young, impressionable kids into a rowdy mob… hmmm, sounds familiar! Except we had no social media — that would have changed things! It might be interesting to have someone research a book comparing what actually happened at SFU to the versions produced by the Vancouver media of the day… Regardless, SFU’s past is what it is… one thing the current SFU community might look at is the energy and dedication exhibited during those early days… not just riots, etc., but the number of student clubs, the symposiums, the general feeling of not only belonging to a unique institution, but helping to set its course.