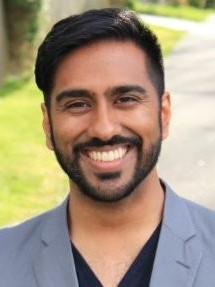 Naveen Girn graduated with a political science BA in 2005. Girn has always followed his passions.

“What helped me [navigate my degree] was to focus on some of the passions that I had… I was really able to find fulfillment from the academic studies I was pursuing,” he says.

Girn’s first job was at the Museum of Vancouver as a community facilitator. His work involved going out into the community, having conversations and building trust and relationships so that people could share their stories and their artifacts with the museum. For the first few years after graduation, the museum was his primary focus, where he was curating exhibits across Metro Vancouver in art galleries and museums, and doing walking tours. He wanted, however, to get closer to his interest in politics.

"I had a passion for politics and the work I was doing in the community engagement field dovetailed nicely into political work,” Girn says. “I was able meet with new communities that no one had reached out to before and engage in conversations about values, issues and political policies, then bring that to the table to have a conversation with an elected member."

His political work started out small, volunteering with Vision Vancouver for the mayoral campaign, after which he was politically involved at the municipal level for some time. Girn's political work and prior experience came together when he went to work in the mayor's office. There he built stakeholder relations, did outreach work and community engagement. His historical knowledge of Vancouver helped him identify gaps in meaningful engagement and generate opportunities for conversations with those who had been marginalized. Now, Girn works in the premier's office in Victoria. The scope is bigger—he no longer needs to know the nuances between Vancouver South and Vancouver Kensington—as he deals with issues not only relevant to Vancouver, but also Courtenay, Cumberland, Osoyoos and across the province.

What he loves about his work is having conversations with people.

"I love that I get to meet people who share their experiences with me," Girn says.

In his current position, he makes use of his research skills, developing oral histories through in-depth interviewing that allows every story to make its way into the narrative. No matter how he connects with someone, if they have a concern to share, he can put that person in touch with someone who can help in some way, whether it is through a policy change or something else.

"I like the fact that I can have conversations with people and help address those concerns," he says.

Girn also works behind the scenes discussing policy ideas with MLAs to make legislation more inclusive for the people of British Columbia. Recently, he helped an MLA initiate and pass legislation to permit head coverings in the BC legislature. All parties supported his idea and now all religious, indigenous and cultural head coverings are allowed in the legislative chamber.

"The foundational strengths that came from the coursework I did at SFU prepared me to go in any direction I wanted to, as my interests changed and developed over time," he says, also noting that it’s truly important to find work that meshes with your values.