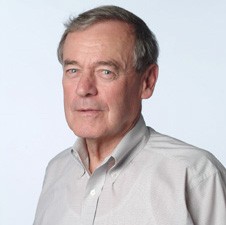 Dr. Tom Calvert has degrees in electrical engineering from University College London (B.Sc.), Wayne State University (MSEE) and Carnegie-Mellon University (Ph.D.).  At SFU he has held faculty appointments in Kinesiology, Computing Science and Engineering Science as well as Interactive Arts and Technology. His administrative positions include that of Vice President for Research and Information Systems. In 2002 TechBC was merged with Simon Fraser and he became Acting Director of the new SFU School of Interactive Arts and Technology from 2002 to 2004. His research interests focus on computer animation and have resulted in the Life Forms system for human figure animation and the DanceForms system for dance choreography. These are now developed and marketed by SFU spin-off company Credo Interactive Inc. of which he is CEO. Dr. Calvert is a registered professional engineer in BC and a Fellow of the Canadian Academy of Engineering.