Faculty of Arts and Social Sciences

"It’s now 2020, and Canada is not on track to meet its greenhouse gas reduction targets," Seth Klein says. "We need radical, urgent changes to the way we live and work."

Urban Studies professor Seth Klein’s new book, A Good War, calls on Canada to recapture the lessons learned during the Second World War to address the climate crisis—the last time our nation faced an existential threat. Klein sees the country's war effort as a helpful and hopeful reminder that in the past, Canadians mobilized in common cause across society to retool our entire economy in the space of a few short years.

“This project began as an exploration of how we can align our politics and economy in Canada with what the science says we must urgently do to address the climate emergency,” Klein says. “I had always planned to include a chapter on lessons from the Second World War. But as I delved into that work, I began to see more and more parallels between our wartime experience and the current crisis, and ultimately decided to structure this entire book around lessons from Canada’s Second World War experience.” 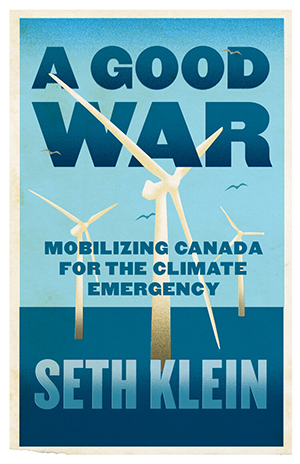 Pundits have said we need a “wartime approach” to climate change, but Klein’s book is the first to delve into what that could actually look like. By looking at Second World War strategies, he shows how wartime propaganda and community efforts can be repurposed today for Canada’s rapid transition to a carbon neutral, or even carbon-zero, future. A Good War demonstrates that this change can create jobs and reduce inequality while tackling our international climate obligations.

“In 2018, the IPCC told Canadians that they would need to reduce greenhouse gas emissions by 50 per cent to prevent a catastrophic 1.5 degree increase in Earth’s average temperature―assumed by many scientists to be a critical ‘danger line’ for the planet and human life as we know it,” says Klein. “It’s now 2020, and Canada is not on track to meet its greenhouse gas reduction targets. We need radical, urgent changes to the way we live and work.”

The book weaves together history, politics and policy, jumping between our past and present, answering questions such as: What did the marshaling of all our economic and human resources look like during the Second World War, and what might a similar deployment look like today? How was it paid for? What kind of leadership did it require? How was public support and national unity secured? What did we do for returning soldiers, and are there lessons for just transition for fossil fuel workers today? What was/is the role of Indigenous people and youth, then and now? And what are the war’s cautionary tales, the warnings of things that brought us shame, that we do not wish to repeat?