AN ENDURING LEGACY OF PASSION FOR SCIENCE AND THE ENVIRONMENT

For those who knew Paul Higgins, his enthusiasm and sense of humour stood out as much as the creativity and scientific rigor with which he approached his work. A Simon Fraser University alumnus, Paul was an expert on the effects of hydropower projects on aquatic ecosystems and made significant contributions to programs at BC Hydro that would reduce environmental impacts.

“He had a real passion for applying science to real world environmental problems and pulling different groups together who could solve those problems,” recalls fellow scientist David Marmorek, an adjunct professor at SFU’s School of Resource and Environmental Management (REM), and a lead scientist and senior partner at ESSA Technologies, an environmental consulting company.

When Paul passed away unexpectedly in 2013, at the age of 54, his colleagues came together once again, this time to carry on his legacy. Fellow scientists at BC Hydro, Ecofish Research, ESSA Technologies and others rallied to establish a graduate award at SFU REM, part of SFU’s Faculty of Environment, where Paul completed his master’s degree.

Now, with generous contributions from family, friends, ESSA Technologies and Ecofish Research, an endowment has been created to support the Paul Higgins Resource and Environmental Management Graduate Award in perpetuity.

Adam Lewis, president of Ecofish Research, first met Paul in 1981 when they were second year undergraduate students at SFU. He and Paul also pursued graduate studies at the university and went on to collaborate as colleagues over the years.

“This award is a great legacy because it provides financial support to people who will develop into great scientists and bring their passion to help solve the many environmental problems that we face today.”

One of those budding scientists is Nikki Kroetsch, who received the award last year. Like Paul, Nikki also completed her undergraduate degree at SFU and followed her desire for knowledge to the interdisciplinary masters in resource management program.

“Knowing that Paul also had a passion for science, learning, and fisheries management is really heartwarming,” Nikki says.

The financial support was a welcome relief for Nikki, who has worked as a server to pay for both her degrees, and allowed her to focus on her academic interests.

As she enters her last semester, Nikki is preparing to join Fisheries and Oceans Canada to continue work related to her graduate research on improving collaboration between resource management agencies and community environmental stewardship groups.

This spirit of collaboration is a defining part of Paul’s legacy. As David explains, it was Paul’s enthusiasm and creativity that brought together experts from different scientific fields, universities and consulting firms to work on projects such as the province’s Water Use Planning process and the environmental assessment of BC Hydro’s Site C Clean Energy Project.

“Paul was the glue that got a lot of these groups to work together constructively as a team,” he says.

Even so, Paul was not afraid to advocate for changes that were better for fish and aquatic habitats. Adam recalls how their educational experiences, working as research assistants and conducting field work at the Bamfield Marine Sciences Centre, shaped their commitment to the scientific method.

“That was a formative experience, to go out to Bamfield for an entire summer and study fish and marine ecology with some world-leading professors. That’s really where I saw Paul’s character form. Paul was very insightful and a creative thinker—and there was a bit of a maverick in him—he would go outside of the box,” he recounts.

SFU’s REM program, created in 1979, was one of the first multidisciplinary programs in resource management to be developed in Canada. As an adjunct professor whose company has hired more graduates from this program than any other, David has unique insight into the strengths of the degrees that both teach applied natural sciences and provide a deep understanding of the social, cultural and economic considerations that are essential to environmental problem-solving.

“SFU REM has really high standards so they get a very excellent crop of students going in and they’re even better coming out,” he says.

From the vantage point of those in the field, the endowment that carries on Paul’s memory is also extending the innovation that took place at post-secondary institutions like SFU when David, Adam and Paul were pursuing their graduate degrees.

“To me, as much as this is Paul’s legacy, it is also a historical legacy of a generation of young scientists that have gone on to have a huge influence on how we manage resources here in British Columbia and Canada,” Adam elaborates.

“This award is a testament to the accomplishments of a generation of young scientists and an encouragement for future scientists.”

As Nikki prepares to embark on her next chapter, equipped with the knowledge she acquired in graduate school, she has a deep appreciation for those who have enabled her intellectual curiosity to flourish. 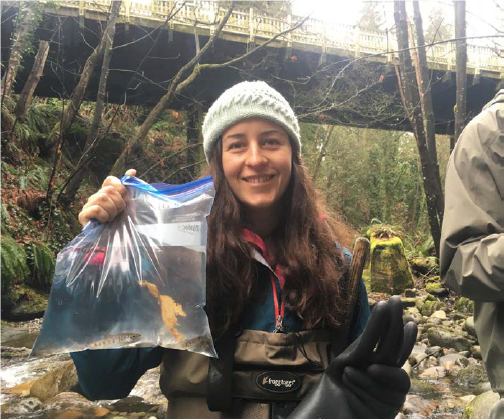 "Thank you to Paul Higgins for inspiring so many wonderful people during his life, and his friends and family for carrying on his passions through this award,” she expresses. “And to other donors who help students like me achieve our goals! We couldn’t do it without you and we are so, so grateful for your contributions."

Vist SFU Advancement and Alumni Engagement to learn about ways to give.